Oscilla Power, Inc. (OPI) is developing a patented magnetostrictive wave energy converter aimed at reducing the cost of grid-scale electricity from ocean waves. Designed to operate cost-effectively across a wide range of wave conditions, this will be the first use of reverse magnetostriction for large-scale energy production.

The device architecture is a straightforward two-body, point absorbing system that has been studied at length by various researchers. A large surface float is anchored to a submerged heave (reaction) plate by multiple taut tethers that are largely made up of discrete, robust power takeoff modules that house the magnetostrictive generators.

The unique generators developed by OPI utilize the phenomenon of reverse magnetostriction, which through the application of load to a specific low cost alloy, can generate significant magnetic flux changes, and thus create power through electromagnetic induction. Unlike traditional generators, the mode of operation is low-displacement, high-force, high damping which in combination with the specific multi-tether configuration creates some unique effects and interesting optimization challenges.

Using an empirical approach with a combination of numerical tools, such as ORCAFLEX, and physical models, we investigated the properties and sensitivities of this system arrangement, including various heave plate geometries, with the overall goal of identifying the mass and hydrodynamic parameters required for optimum performance. Furthermore, through a detailed physical model test program at the University of New Hampshire, we were able to study in more detail how the heave plate geometry affects the drag and added mass coefficients. In presenting this work we will discuss how alternate geometries could be used to optimize the hydrodynamic parameters of the heave plate, allowing maximum inertial forces in operational conditions, while simultaneously minimizing the forces generated in extreme waves.

This presentation will cover the significant findings from this research, including physical model results and identified sensitivity parameters. In addition, we will discuss some preliminary results from our large-scale ocean trial conducted in August & September of this year. 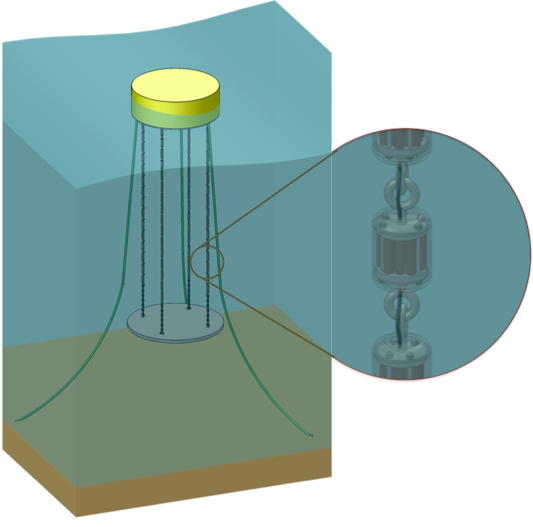