B21B-0046:
The mobilization of toxic trace elements due to pyrite oxidation at the mega-nourishment The Sand Motor, the Netherlands

Pilot project “The Sand Motor” is a 21.5 million m3 nourishment of sandy sediment situated along the coast of the Netherlands close to The Hague (figure 1). It was constructed in 2011 and initially spans the shore over a 2.4 km stretch and extends up to 1 km offshore creating a hook-shaped peninsula. Due to wind, waves and currents the Sand Motor will gradually change in shape and eventually be fully incorporated into the dunes and beach. This concept is expected to be more environmentally friendly compared to traditional beach and shoreface nourishments. The aim of this project is to understand how oxidation changed the geochemistry of the sediment applied and to address possible toxic element mobilization.

The sediment was taken 10 km out of shore from the sea floor, which was at a depth of 20 m. Grab samples of the upper 25 cm seabed analyzed for geochemical mapping of Southern North Sea sediments, show locally high contents of sulfur, iron and trace elements like arsenic indicating presence of pyrite with impurities. Sediment was removed to a maximum depth of 6 m below sea floor, reaching different geological layers including bog iron ore layers.

At the Sand Motor, samples were taken of surface water, pore water and sediment from the surface to a depth of 10 m, the bottom of the nourishment. Analyses show that pyrite oxidation has occurred above sea level and mobilization of arsenic is present up to a maximum concentration of 92 ug/L in shallow pore waters. 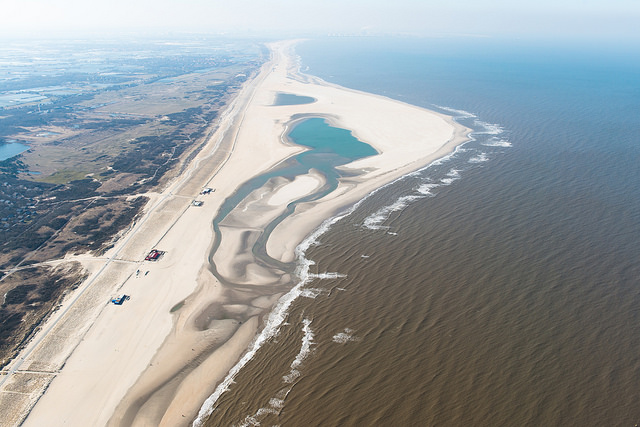