Fire-derived black carbon (BC) in soil, including charcoal, represents a potentially important fraction of terrestrial carbon cycling due to its presumed long persistence in soil. Interpretation of site BC retention is important for assessing feedbacks to ecosystem processes including nutrient and water cycling. However, interaction between vegetation disturbance, BC formation, and off site transport may exist that complicate interpretation of BC addition to soils from wildfire or prescribed burns directly. To investigate the relationship between disturbance and site retention on soil BC, we determined BC concentrations for a woodland in central Texas, USA, from study plots in hilly terrain with a fire scar dendrochronology spanning 100 years. BC values were determined from 13C nuclear magnetic resonance (NMR) spectroscopy. Estimated values showed mean BC concentration of 2.73 ± 3.06 g BC kg-1 (0.91 ± 0.51 kg BC m-2) for sites with fire occurrence within the last 40 years compared with BC values of1.21 ± 1.70 g BC kg-1 soil (0.18 ± 0.14 kg BC m-2) for sites with fire 40 – 100 years ago. Sites with no tree ring evidence of fire during the last 100 years had the lowest mean soil BC concentration of 0.05 ± 0.11 g BC kg-1 (0.02 ± 0.03 kg BC m-2). Molecular proxies of stability (lignin/N) and decomposition (Alkyl C/O-Alky C) showed no differences across the sites, indicating that low potential for BC mineralization. Modeled soil erosion and time since fire from fire scar data showed that soil BC concentrations were inversely correlated. A modified the ecosystem process model, Biome-BGC, was also used simulate the effects of fire disturbance with different severities and seasonality on C cycling related to the BC production, effect on soil water availability, and off-site transport. Results showed that BC impacts on ecosystem processes, including net ecosystem exchange and leaf area development, were predominantly related to fire frequency. Site BC loss rates were affected by initial slope-affected erosion, fire severity, vegetation type, and rate of vegetation recovery. The simulation results showed that fire types, such as high severity, was generally associated with low site BC retention related to low vertical transfer of BC into soils, buoyancy of BC particles, and surface runoff from unvegetated soils. 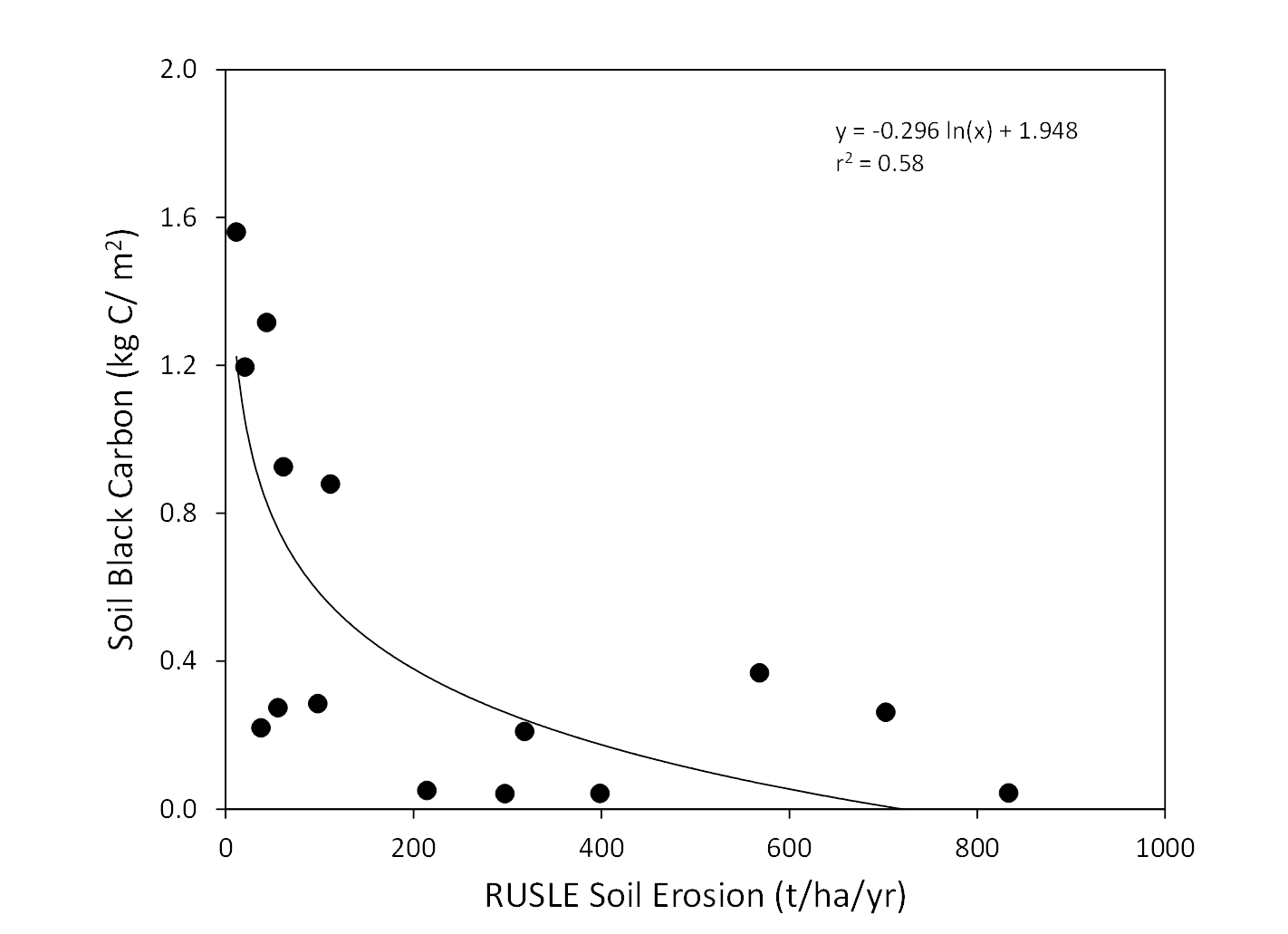