S13A-4426:
Application of the H/V and SPAC Method to Estimate a 3D Shear Wave Velocity Model, in the City of Coatzacoalcos, Veracruz.

Methods that use seismic noise or microtremors have become very useful tools worldwide due to its low costs, the relative simplicity in collecting data, the fact that these are non-invasive methods hence there is no need to alter or even perforate the study site, and also these methods require a relatively simple analysis procedure. Nevertheless the geological structures estimated by this methods are assumed to be parallel, isotropic and homogeneous layers. Consequently precision of the estimated structure is lower than that from conventional seismic methods. In the light of these facts this study aimed towards searching a new way to interpret the results obtained from seismic noise methods.

In this study, seven triangular SPAC (Aki, 1957) arrays were performed in the city of Coatzacoalcos, Veracruz, varying in sizes from 10 to 100 meters. From the autocorrelation between the stations of each array, a Rayleigh wave phase velocity dispersion curve was calculated. Such dispersion curve was used to obtain a S wave parallel layers velocity (VS) structure for the study site. Subsequently the horizontal to vertical ratio of the spectrum of microtremors H/V (Nogoshi and Igarashi, 1971; Nakamura, 1989, 2000) was calculated for each vertex of the SPAC triangular arrays, and from the H/V spectrum the fundamental frequency was estimated for each vertex. By using the H/V spectral ratio curves interpreted as a proxy to the Rayleigh wave ellipticity curve, a series of VS structures were inverted for each vertex of the SPAC array. Lastly each VS structure was employed to calculate a 3D velocity model, in which the exploration depth was approximately 100 meters, and had a velocity range in between 206 (m/s) to 920 (m/s). The 3D model revealed a thinning of the low velocity layers. This proved to be in good agreement with the variation of the fundamental frequencies observed at each vertex.

With the previous kind of analysis a preliminary model can be obtained as a first approximation, so that more careful studies can be conducted to assess a detailed geological characterization of a specific site. The continuous development of the methods that use microtremors, create many areas of interest in the seismic engineering study field. This and other reasons are why these methods have acquired more presence all over the globe. 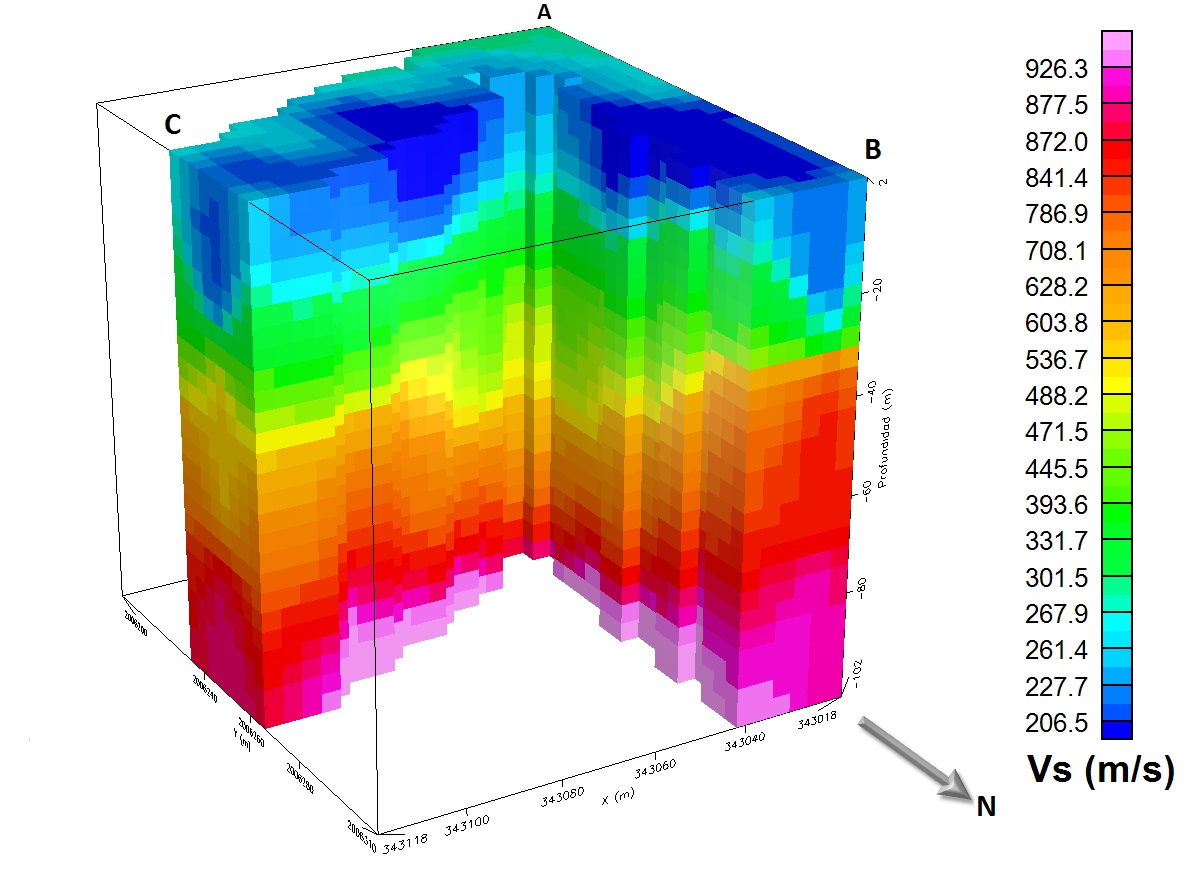