The last of remaining multi-year ice exits the Arctic Ocean via Nares Strait to the west of northern Greenland. Measuring ice draft and velocity directly, we maintained moored sensors in Nares Strait from 2003 through 2009. Two ice profiling sonars measured acoustic travel times from about 100-m depth to the bottom of the sea ice. Estimates of ice draft result, if vertically averaged density, speed of sound, and depth of the sensor are known. We use concurrently measured temperature, salinity, and pressure at nearby mooring locations for those properties at daily time scales. Sensitivity tests reveal that our ice draft estimates are accurate to within 0.1 m.

With ice drafts sampled at 15 second intervals, we construct ice draft probability density functions to define ice categories and to compare these at inter-annual and seasonal time sales. Categories are open water (no ice), thin ice (< 0.5 m), first year ice (0.5- 2 m; FYI), multi year ice (>2 m; MYI). FYI dominated the ice draft distribution from 2003 to 2006 when it was observed about half of the time. It diminished to ~20% from 2006 to 2009 when much FYI was replaced by a combination of thin ice and MYI. We interpret this finding as a transition towards a more dynamic and advective ice regime in Nares Strait. 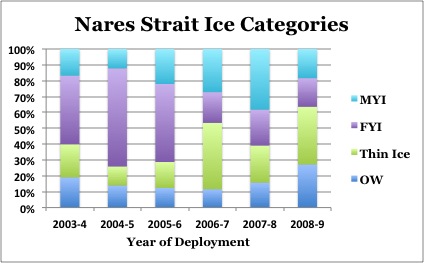