SLAP (Scanning L-band Active Passive) comprises of a fully polarimetric L-band radiometer and fully polarimetric L-band radar with a shared antenna. SLAP is designed to be compatible with several aircrafts; specifically, C-23, Twin Otter, P-3, and C-130. SLAP is designed for simplicity, accuracy, & reliability. It leverages, as much as possible, existing instruments, hardware, and software in order to minimize cost, time, and risk.The SLAP airborne/ground campaign is designed to conduct flight testing and ground truth for the airborne instrument. The campaign took place the third week of December 2013 in Eastern Shore, MD. SLAP contributes to the NASA’s core mission because of its ability to serve as an airborne simulator for the SMAP (Soil Moisture Active Passive) satellite mission, one of NASA’s flagship missions scheduled to launch in January 2015. A 3-day aircraft validation campaign was conducted where the new SLAP instrument flew three separate days over the proposed sampling region. The study area is a mixed agriculture and forest site located about 1 hour east of Washington, DC on the Eastern Shore (of the Chesapeake Bay). This region is located on the Delmarva Peninsula. The advantages of the selected site are: (1) Site was used before in previous field campaign (SMAPVEX08) (2) ARS HRSL has some established sampling sites within region (3) Dynamic variation in land cover (4) Variety of plant structures and densities. The goal of this campaign was to fly the instrument over the proposed site before a rain event, then have 2 other flights after the rain event to capture a dry down. In conjunction with the aircraft, there was in-situ ground sampling. Ground observations were collected concurrent with aircraft flights. These included soil moisture, soil temperature, surface temperature, surface roughness and vegetation parameters. Forest sites were monitored with small temporary networks of in situ sensors installed prior to the first flight. Soil moisture was characterized for all fields within an area large enough to include several aircraft footprints. The field conditions during the campaign were favorable to demonstrate the accuracy of the instrument. A variation in soil moisture was observed within the data set which is ideal for instrument validation. 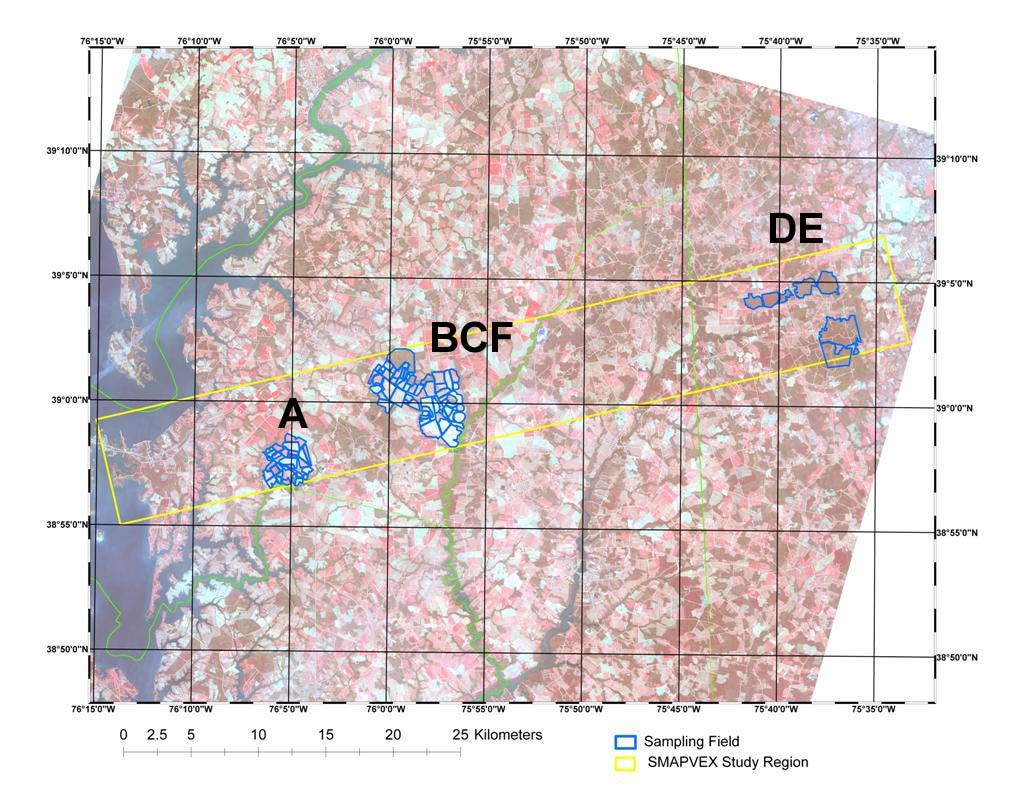