Volcanic gas fluxes give important information on both the amount of degassing and magma reservoirs. In most of magmas, water vapor (H2O) and carbon dioxide (CO2) are major components of volcanic gas. However, sulfur dioxide (SO2) is one of the targets of remote sensing due to their low concentration in the environment and easy detection by ultraviolet spectroscopy. Accordingly, plume imaging using passive ultraviolet cameras is a relatively simple method to study volcanic degassing, expeditious manner and can be used up from distances of about 10 km from source of emissions.

We estimated SO2 concentrations and fluxes in volcanic plumes with the ultraviolet camera Envicam-2, developed by Nicarnica Aviation, acquired by the Geological Survey of Chile (SERNAGEOMIN). The camera has filters that allow passage of ultraviolet radiation at wavelengths of interest. For determining whether there is absorption of radiation associated with the presence of SO2 the Beer-Lambert law was used for quantifying concentrations using appropriate calibration cells. SO2 emissions to the atmosphere were estimated using wind speed as an approximation to the plume transport. In this study we reported the implementation of a new methodology for using Envicam-2 and subsequent collection of SO2 concentrations and fluxes in passive degassing volcanoes. Measurements were done at Lascar, Ollagüe and Irruputuncu volcanoes, located in northern Chile. The volcanoes were chosen because of optimal atmospheric conditions for ultraviolet imaging.

Results indicate concentrations within the expected ranges for three volcanoes generally between 400-1700 ppm∙m. In the case of Láscar volcano, the emission rates of SO2 range from 250 to 500 tonnes/day for a same image of the plume. In particular, wind speed was determined from scaling images and are consistent with data from regional numerical models, as well as records of the meteorological stations installed at the ALMA astronomical center, located about 40 km north of the volcano.

This study reveals new insights and challenges related to remote sensing of volcanic gases in Chile. In particular, the evolution of the SO2 emission in active volcanoes can be a powerful monitoring tool that can be complemented with other geophysical techniques. 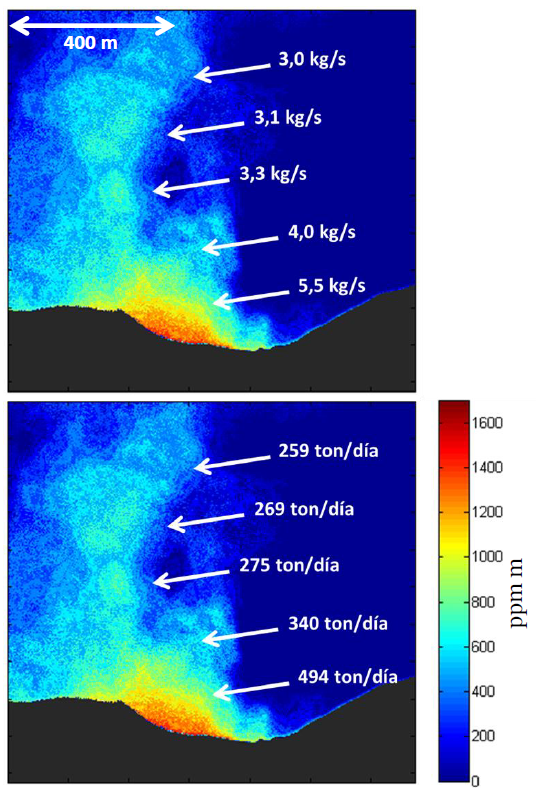