Fault valving and transient fluid flow has long been suspected to be an important process in the earthquake cycle, but has not previously been captured by direct measurements during an episode. In particular, earthquakes are thought to drive fluids in fault zones, but again, evidence has been limited to the geologic record. Here we report on the signature of fluid pumping events inside the Tohoku Fault associated with individual earthquakes. As part of the Japan Trench Fast Drilling Project (JFAST), a sub-seafloor temperature observatory was installed across the plate boundary fault zone that ruptured during the 2011 Mw 9.0 Tohoku-oki earthquake. The observatory consisted of 55 autonomous temperature sensing dataloggers extending up to 820 m below sea floor at a water depth of ~7 km. The temporary deployment recorded data from July 2012 through April 2013. In addition to measuring the frictional heat signal from the megathrust earthquake, the high-resolution temperature time series data reveal spatially coherent temperature transients following regional earthquakes. Temperature increases vertically upwards from a fracture zone and decreases downwards, which is consistent with the expected signature of a pulse entering the annulus from the fracture zone. The anomalies are a few hundredths of degree Celsius and occur repeatedly at depths that are independently interpreted to have higher fracture permeability. High-pass filtered data are spatially correlated in areas disturbed by transient fluid advection. Fluid pulses occur in response to over a dozen local earthquakes, including a Mw 5.4 on 14 October 2012, a Mw 5.5 on 11 November 2012, and a doublet of two very local Mw 7.2 intraplate earthquakes on 7 December 2012, along with its associated aftershocks. There does not appear to be a response to large far-field earthquakes such as the 28 October 2012 Mw 7.8 Haida Gwaii or 6 February 2013 Mw 8.0 Santa Cruz Islands earthquakes.

These measurements provide the first in situ documentation of seismic pumping at fractured regions of the fault damage zone. Near fault measurements such as these may provide insight into drivers of earthquake occurrence. The redistribution of fluid pressures within fault zones, such as observed here in response to earthquakes, is a potential mechanism that may be involved in earthquake triggering. 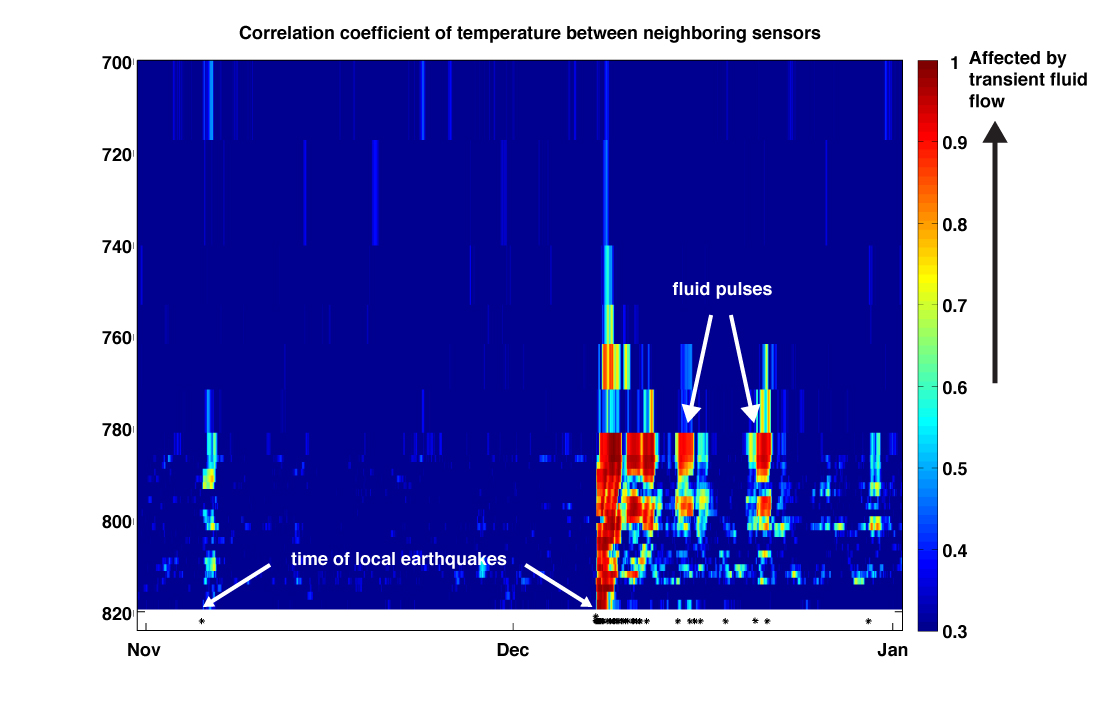