During the 2004 Indian Ocean Tsunami, Indonesia had the largest number of casualties around 170,000. International society has supported tsunami early warning system, disaster management and disaster education for Indonesia. The past ten years saw several tsunamis in Indonesia after the 2004 Indian Ocean tsunami. Construction of tsunami early warning system was not in time the 2006 Pangandaran tsunami in Jawa Island.

On the other hand, tsunami science has been developed for this decade. Tsunami early warning system has been developed by deep ocean pressure gauges (DART system), coastal tide gauges, GPS buoys and so on. Tsunami folklore has been collected and used education and connected with tsunami deposit. However, the tsunami early warning system and other science application were not widely used at once in Indonesia. GPS buoys were stolen by fishery people. One tsunami evacuation building are not used for evacuation by local people in Aceh Sumatra Island in 2012 though locations of the buildings were selected by scientific numerical simulation. Big panic and trafic accidents occurred by M8.6 earthquake in Aceh in April 2012 and reveal lack of disaster management planning in urban planning during reconstruction (Fig.1: Trafic jam in Banda Aceh, source MSN news photo). In addition to this, the 2011 Tohoku earthquake and tsunami reveal fragilities tsunami preparedness. How should we decide to use the tsunami science?

We research field situation in Aceh the after 10 years past from the 2004 Sumatra event. This presentation discusses issues of the gap between tsunami science and operations through field research in Aceh now. 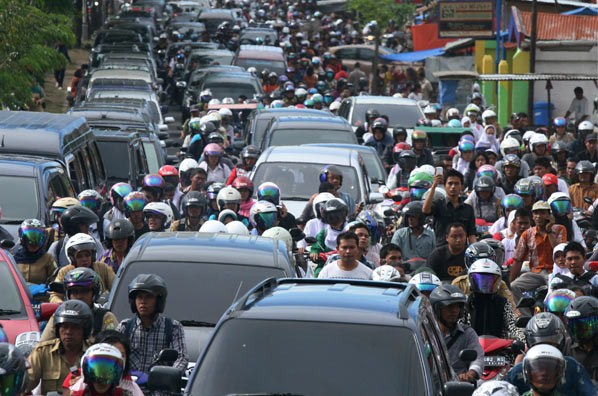