B53C-0210:
Estimation of CO2 flux at paddy fields in Asia by MODIS data

Paddy fields in monsoon Asia have a great important role in the global budget of GHGs. Recently long-term fluxes are continuously observed at cropland ecosystems in Asia. In this study, the exchanges of CO2 at a number of paddy fields were estimated by a satellite-based empirical model with the Terra/MODIS data, and the results were compared with the ground-based observation data.

Gross primary productivity (GPP) is estimated from normalized difference vegetation index (NDVI) and photosynthetically active radiation (PAR). Ecosystem respiration (RE) is also estimated from NDVI and land surface temperature. And, net ecosystem exchange of CO2 (NEE) was calculated the difference between GPP and RE. Some parameters used in the model were determined by the ground data measured at HCH, the single-rice site in western Japan (34N32,133E56).

CO2 exchanges at four sites -- HCH, MSE, SGA, and IRRI -- were estimated. PAR and air temperature as input data were also tested by ground data at each sites. Seasonal variations of Gpp, Re, and NEE during cultivated period at four sites were compared. The model reasonably reproduced the seasonal variation of CO2 exchange at three sites in Japan. However, Gpp by the model was overestimated in early stage of the first cropping and through the second cropping at the Phillipine site, IRRI. Cumulative NEE by the model showed the difference by from -6.8 to 10.1 % compared with the observed NEE. 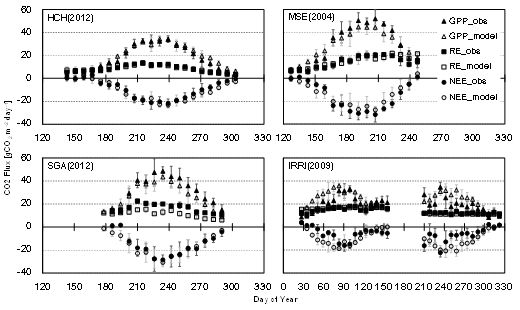