A rain storm occurred in the Cida River catchment, Dechang County, Sichuan, China during August 20 - 24, 2004. There were 10 gully type debris flows by landslides were triggered while no debris flow was triggered in the 12 neighboring catchments. The hydrological conditions in the different sub-catchments within short distance were almost identical during this large range rainfall event. Neighboring catchments with similar geological conditions were available and could be selected. Therefore the only decisive factors for debris flow formation which differ in these sub-catchments must be related to topography. The gradient range of 25 - 45 degrees shows to be most sensitive for the triggering of debris flows. The catchment size A, the average gradient of a stream J, and the percentage (S) of catchment area with hill terrain gradient (25° - 45°) are selected as the topographical parameters. A new factor T = SJ0.8(A/A0)0.15 (A0 is unit catchment size = 1km2) is proposed as a single topographical indicator, which may be used as a threshold for the formation of gully type debris flows by landslides. The probability of debris flow formation increases with increasing T-values. The role of the slope gradient and the average gradient of a stream are far more important than the role of catchment size. The T-factor was successfully validated in debris flow gullies with the same initiation mechanism in the Dayi area, Guizhou, China. It may be used for other areas with the geological factor and rainfall factor because the relationship is partly from the formation mechanism of gully type debris flow by landslides. 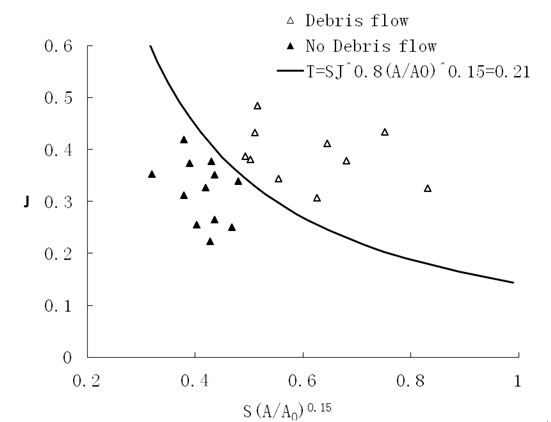