The advent of high-resolution seismometer array deployments such as USArray, IberArray or the upcoming AlpArray pave the way for significantly enhanced tomographic resolution across their tectonically complex target areas. The optimal interpretation of these datasets requires a new generation of multiple-resolution tomographic imaging approaches. Our recent anisotropic S-wave tomography model SAVANI is adaptive and multi-scale in the sense that it relies on a data-driven adaptive parameterization scheme, which automatically adjusts grid size to local ray sampling density, where demanded by the data. Such automatic rescaling of the parameterization grid provides an efficient means to stepwise improve upon a global background model by updating the tomographic system whenever new observations become available. Since our method employs phase and dispersion measurements from the complete time- and frequency range of the seismic record, it is akin to other types of waveform inversion and sensitive across the entire depth extent of the mantle. We present our current work towards an update of the purely ray-theoretical first version of SAVANI, which involves the reinterpretation of the regional portion of our global dataset using more accurate full-waveform based sensitivity functions that should facilitate an adequate extraction of high-resolution regional structure in areas where data coverage permits it. Adaptive-resolution tomography models, as developed with our algorithm, honour the multi-scale nature of mantle convection, and have various advantages over purely global models when applied in the study of global and regional geodynamics. We focus here on upper mantle dynamics and the evolution of the oceanic lithosphere. Importantly, we find a distinct decorrelation between anisotropy patterns as observed in our tomography and conceptual half-space cooling models or dynamic predictions of anisotropic texture, respectively. This observation implies that sub-oceanic anisotropy could be independent of the age of the ocean floor. We discuss associated shortcomings in tomographic resolution, evaluating a family of competing dynamic models of radial upper mantle anisotropy. 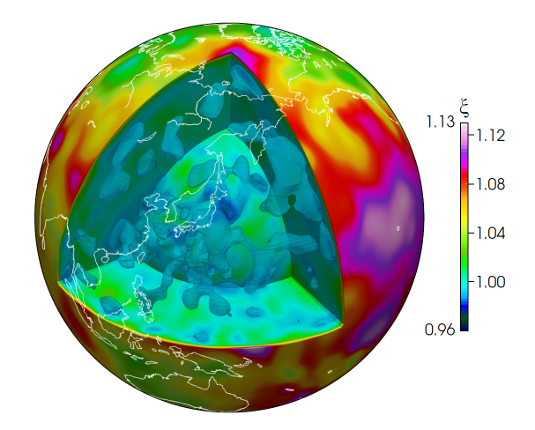