Visualization of EM diffusion for an airborne EM (AEM) system is important for understanding the transient procedure of EM diffusion. The current distribution and diffusion features also provide effective means to evaluate EM footprint, depth of exploration and further help AEM system design and data interpretation. Most previous studies on EM diffusion (or “smoke ring” effect) are based on the static presentation of EM field, where the dynamic features of EM diffusion were not visible. For visualizing the dynamic feature of EM diffusion, we first calculate in this paper the frequency-domain EM field by downward continuation of the EM field at the EM receiver to the deep earth. After that, we transform the results to time-domain via a Fourier transform. We take a homogeneous half-space and a two-layered earth induced by a step pulse to calculate the EM fields and display the EM diffusion in the earth as 3D animated vectors or time-varying contours. The “smoke ring” effect of EM diffusion, dominated by the resistivity distribution of the earth, is clearly observed.

The numerical results for an HCP (vertical magnetic dipole) and a VCX (horizontal magnetic dipole) transmitting coil above a homogeneous half-space of 100 ohm-m are shown in Fig.1. We display as example only the distribution of EM field inside the earth for the diffusion time of 0.05ms. The detailed EM diffusion will be shown in our future presentation. From the numerical experiments for different models, we find that 1) the current for either an HCP or a VCX transmitting dipole propagates downward and outward with time, becoming wider and more diffuse, forming a “smoke ring”; 2) for a VCX transmitter, the underground current forms two ellipses, corresponding to the two polarities of the magnetic flux of a horizontal magnetic dipole, injecting into or ejected from the earth; 3) for a HCP transmitter, however, the underground current forms only one circle, corresponding to the polarity of the magnetic flux for a vertical magnetic dipole, injecting into the earth; 4) there exists no vertical current in an isotropic homogeneous half-space. The currents for both HCP and VCX transmitting dipole flow horizontally. 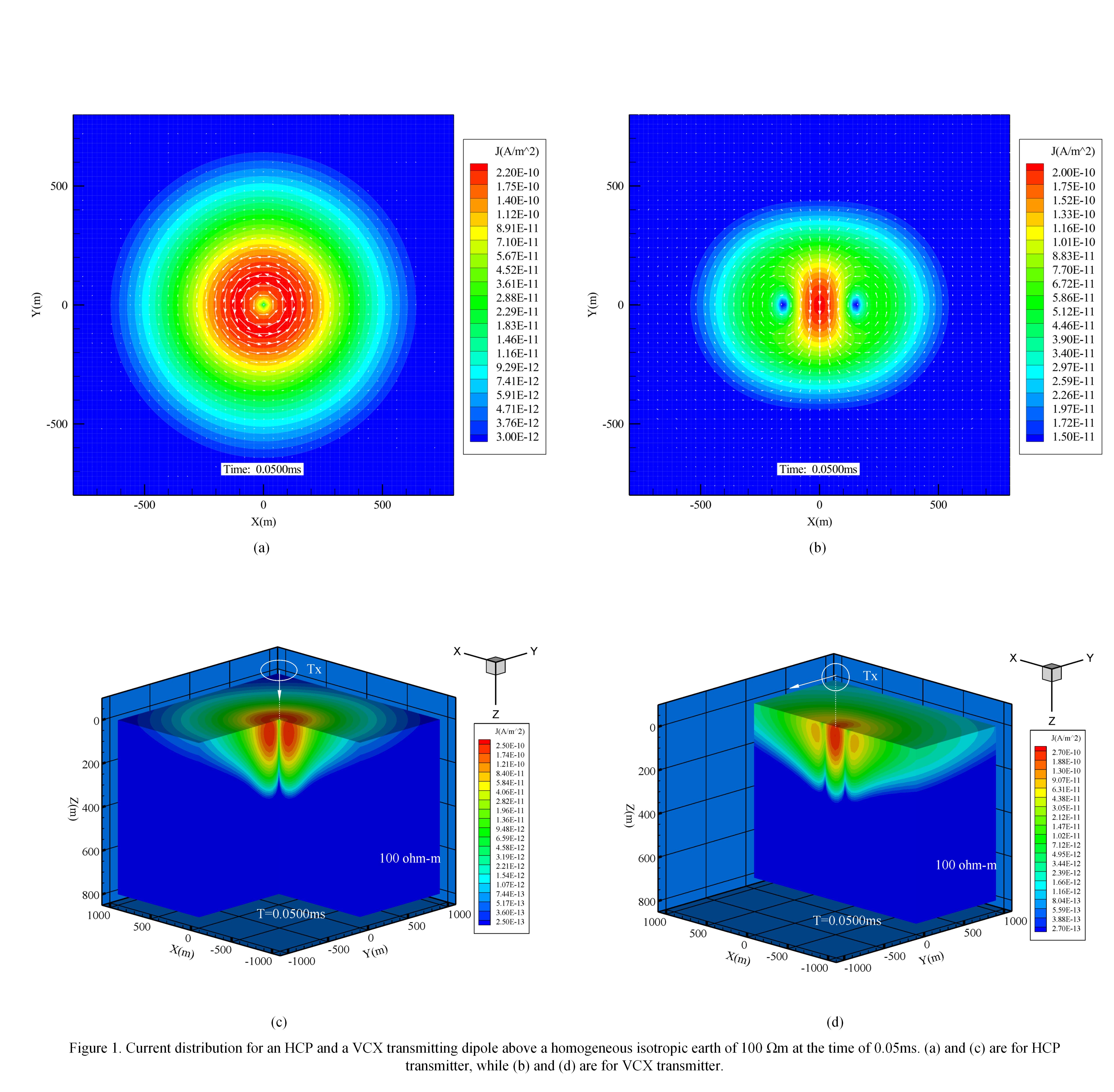