NH41C-08:
Estimation of Dynamic Friction Process of the Akatani Landslide Based on the Waveform Inversion and Numerical Simulation

Understanding physical parameters, such as frictional coefficients, velocity change, and dynamic history, is important issue for assessing and managing the risks posed by deep-seated catastrophic landslides. Previously, landslide motion has been inferred qualitatively from topographic changes caused by the event, and occasionally from eyewitness reports. However, these conventional approaches are unable to evaluate source processes and dynamic parameters.

In this study, we use broadband seismic recordings to trace the dynamic process of the deep-seated Akatani landslide that occurred on the Kii Peninsula, Japan, which is one of the best recorded large slope failures. Based on the previous results of waveform inversions and precise topographic surveys done before and after the event, we applied numerical simulations using the SHALTOP numerical model (Mangeney et al., 2007). This model describes homogeneous continuous granular flows on a 3D topography based on a depth averaged thin layer approximation. We assume a Coulomb's friction law with a constant friction coefficient, i. e. the friction is independent of the sliding velocity. We varied the friction coefficients in the simulation so that the resulting force acting on the surface agrees with the single force estimated from the seismic waveform inversion.

Figure shows the force history of the east-west components after the band-pass filtering between 10-100 seconds. The force history of the simulation with frictional coefficient 0.27 (thin red line) the best agrees with the result of seismic waveform inversion (thick gray line). Although the amplitude is slightly different, phases are coherent for the main three pulses. This is an evidence that the point-source approximation works reasonably well for this particular event.

The friction coefficient during the sliding was estimated to be 0.38 based on the seismic waveform inversion performed by the previous study and on the sliding block model (Yamada et al., 2013), whereas the frictional coefficient estimated from the numerical simulation was about 0.27. This discrepancy may be due to the digital elevation model, to the other forces such as pressure gradients and centrifugal acceleration included in the model. However, quantitative interpretation of this difference requires further investigation. 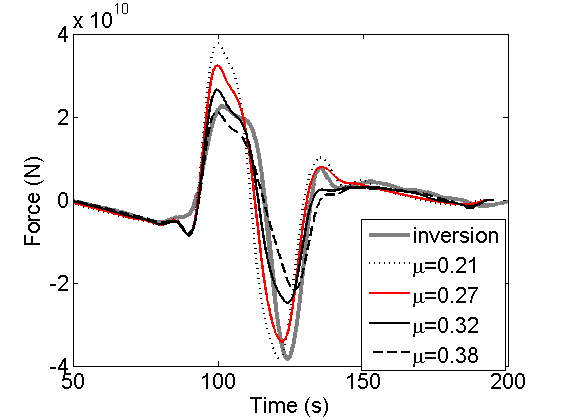