Theoretical work suggests that magnetic fields play a fundamental role in the evolution of protoplanetary systems. Efficient radial transport of angular momentum in the protoplanetary disk, an essential requirement for the formation of stars and planets, may be mediated by the magneto-rotational instability (MRI) or magnetocentrifugal winds (MCW). Magnetic fields may also generate turbulence in the nebular gas, potentially leading to instabilities that created the first planetesimals. Finally, magnetic reconnection events may lead to the formation of chondrules, which are millimeter-sized meteoritic inclusions that likely constituted a major building block of terrestrial planets in the solar system.

Direct measurements of the magnetic field in the planet-forming region of a protoplanetary disk, which have remained hitherto elusive to astronomical observations, are necessary to test the theoretical models discussed above. Because chondrules were heated and cooled in the nebula, they potentially carry a record of nebular magnetic fields. Newly developed microsampling and magnetic field mapping techniques based on the SQUID microscope can measure very weak moments (<10-13 Am2) from oriented small (~100 µm) samples, enabling the recovery of detailed paleomagnetic data from single chondrules.

We performed paleomagnetic experiments on 13 chondrules from the primitive LL3.0 chondrite Semarkona. We showed that dusty olivine-bearing chondrules (Fig. 1) were magnetized prior to the assembly of the meteorite in a magnetic field of 54±21 µT. This field strength provides evidence against chondrule formation near the sun as predicted by the x-wind model while favoring weak-field processes such as nebular shocks or planetesimal collisions. Furthermore, such fields are sufficient to redistribute angular momentum efficiently via either the MRI or MCW, strongly suggesting that magnetic fields are the primary driver of mass accretion in protoplanetary disks.

Ongoing paleomagnetic work focuses on other chondrite classes, potentially constraining magnetic fields for a range of ages and locations in the protoplanetary disk. Together, these efforts highlight the promise of new techniques to expand the relevance of paleomagnetism to non-planetary fields and astrophysical questions. 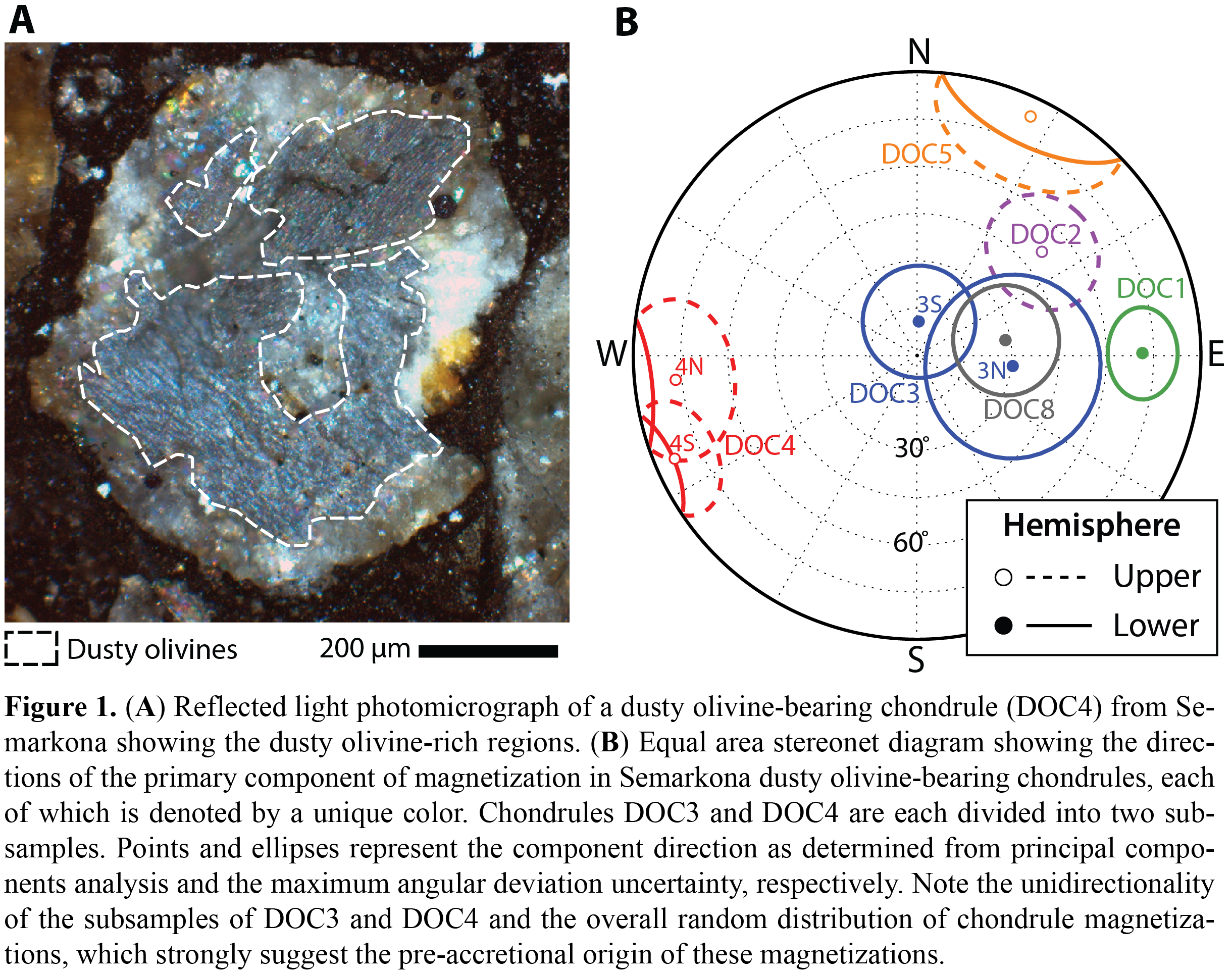