B53K-03:
Predominant Environmental Factors Controlling and Predicting Phenological Seasonality Across the CONUS over the Last Decade

We used phenological ecoregions to stratify the development of multiple linear regression equations predicting Day-of-Year (DOY) for a set of five Phenological Completion Milestones across the conterminous United States for each year during the MODIS era, based on five potential ecological driver variables. The primary goal was to map the predictability of each Phenological Milestone, and to rank and map the most important driver variables each year, but the potential for predicting season DOY from prognostic GCM outputs was also evaluated.

Five pre-defined percent-completion milestones were established in terms of threshold percentages of maximum annual NDVI to gauge seasonal phenological progression. Unlike other Start-of-Season metrics, these Phenological Completion Milestones do not attempt to correspond with particular observable events on the ground. Nor are they species-specific, but instead describe emergent ecosystem characteristics of Land Surface Phenology. While arbitrary, they can be readily applied at national scales. The Day-of-Year (DOY) when the 20%, 80%, maximum, 80% and 20% Phenological Milestones are reached in each MODIS cell correspond roughly to start of spring, summer, peak, fall and winter, respectively.

We used Daymet (daymet.ornl.gov) to obtain interpolated daily 1km2 values from 2000 - 2013 for daily minimum and maximum temperature, precipitation, day length, and vapor pressure deficit (VPD). We accumulated annual heat sum above 5 C and cold sum below 5 C since Jan 1, and precip totals after Mar 1. Daily values were used for day length and VPD.

A set of statistically-defined national phenological ecoregions, or "phenoregions," were created at multiple levels of division using a parallel clustering algorithm to group cells having a similar annual phenological profile of MODIS NDVI. Each resultant phenoregion contains vegetation that showed similar phenological timing in each year. A multiple linear regression based on values accumulated up to that DOY was developed to predict DOY when a particular Phenological Milestone was achieved within each phenoregion. Resulting maps of R-squared, primary driver, and residuals were coherent and interpretable. The desert southwest "spring" was highly predictable, and was controlled predominantly by accumulated precipitation. 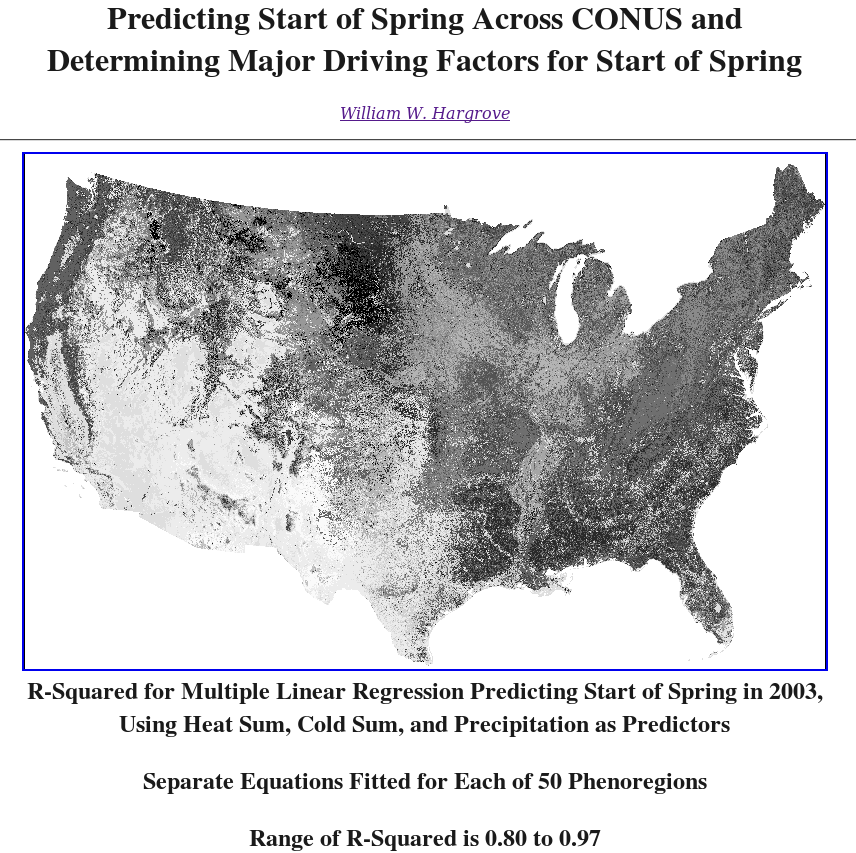