In reflection seismic interpretation, a 1-D convolutional model is commonly used to interpret amplitude variations based on the geometric ray theory assuming seismic wave to reflect at a reflection point; however, the propagation of seismic waves actually occurs in a finite zone around the geometric ray path and gets reflected from a zone known as Fresnel zone. The collected signal at the surface turns out to be the superposition of reflections from within the Fresnel zone, which is a function of texture. Generally, for a rough texture such as sandstone, the dominant reflection is from the zone margin, while for a smooth texture such as marine shale, the dominant reflection is from the zone center. Based on this concept, Fresnel-zone texture directly affects amplitude variations with offset (AVO), azimuth (AVAZ), and frequency (AVF).

Here we develop a computer algorithm for evaluating Fresnel-zone textural roughness. The algorithm starts with dividing the Fresnel zone into a set of micro-zones. It then builds an initial texture model to be convolved with an extracted wavelet. By comparing the synthetic signal from a Fresnel zone to the real seismic signal within an analysis window at a target location, the model is adjusted and updated until both synthetic and real signals match best. The roughness is evaluated as the correlation coefficient between the generated texture model within the Fresnel zone and the ideal model for a rough texture medium. Our new algorithm is applied to a deep-water 3D seismic volume over offshore Angola, west Africa. The results show that a rough texture is associated with channel sands, whereas a smooth texture with marine shale. 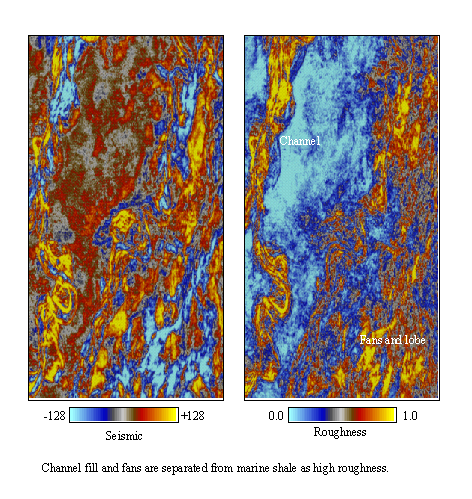