DI23B-4296:
Earth's Uranium and Thorium Content and Geoneutrinos Fluxes Based on Enstatite Chondrites

Earth’s thermal evolution is controlled by the amount of heat released by the radioactive decay of 40K, 238U, 235U and 232Th. Their crust and upper mantle content is inferred from direct sampling, whereas estimating the lower mantle concentrations requires indirect constraints, such as those brought by primitive chondrites, or by geoneutrinos. Here we follow the framework of “E-Earth” models, based on the isotopic and chemical composition of E-chondrites (EC), to calculate U and Th concentrations in the Earth’s present day mantle, and the corresponding geoneutrinos flux. The model uses a compilation of data of U and Th contents of EC and account for Earth differentiation and crust extraction. We obtain that the Bulk Silicate Earth (BSE) contains 15.4±1.8 ppb of Uranium and 51.3±4.4 ppb of Thorium, and has an average Th/U mass ratio of 3.4±0.4, with a peak value around 3.15. The prediction of geoneutrinos events originating from the mantle (i.e., without taking into account the local contribution of the crust) is 5.09±0.97 TNU, with 4.30±0.83 TNU coming from Uranium, and 0.79±0.14 TNU from Thorium. These numbers are in close agreement with the most recent KamLAND detector estimate, and compatible with the (higher) Borexino flux. On the other hand, the KamLAND constraints are not consistent with the high content of heat producing elements in the mantle predicted by the simple application of parameterized convection model to the thermal evolution of the Earth's mantle. Because the measurement error in the mantle neutrino flux is currently dominated by the crustal contribution, geo-neutrinos cannot for now discriminate between CI-based and EH-base models of Earth's composition. Further progress is expected if an ocean based geoneutrino detector is deployed. 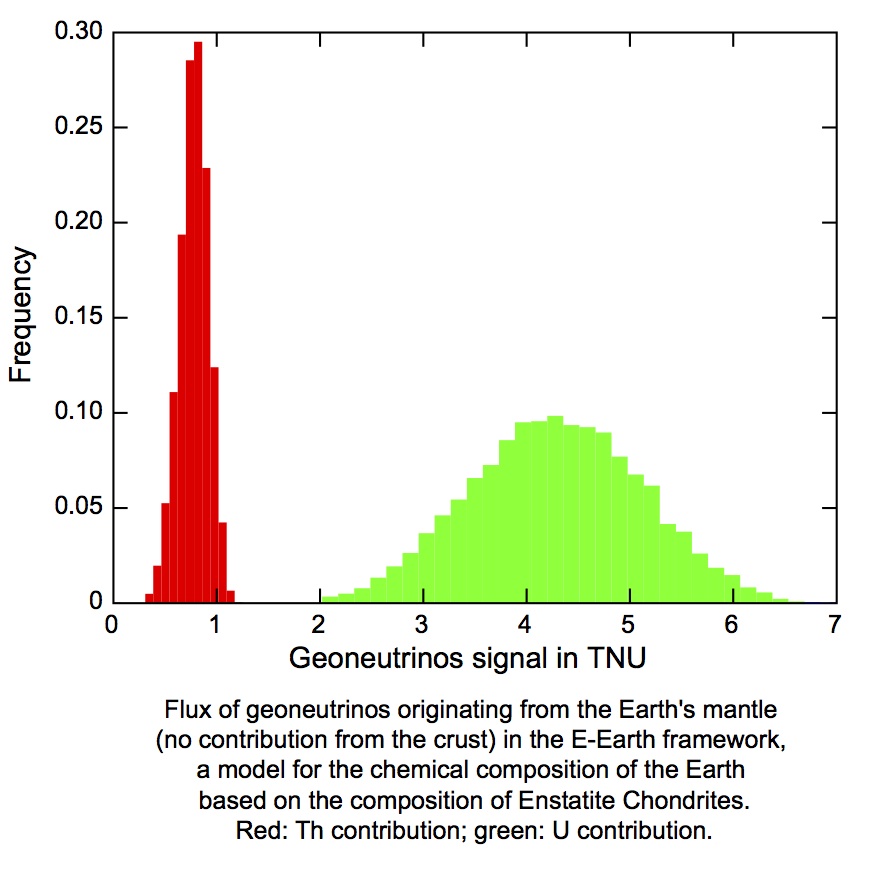