In regions of incipient break-up, such as Afar, it has been found that there is a variation in the composition of the erupted basalts and distribution of faulting between different segments. In Afar, the Dabbahu magmatic segment shows distributed faulting while the Erta Ale segment to the north does not. Analysis of the mafic rocks that erupted recently (< 100 ka) has found that there is a difference in rare Earth (REE) composition between these segments. Erta Ale is relatively enriched in lighter elements when compared to Dabbahu. We will explore if the observed differences in the accommodation of extension, the increased distribution of faulting, and the variation in melt composition are both functions of crustal rheology. Current research has recently found that crustal rheology impacts the onset and distribution of melting (Peréz-Gussinye et al., submitted to EPSL). We build upon this work, using a numerical model of extension and decompression melting to explore how upper and lower crustal rheology impacts the zone of partial melting.

We explore various Arrhenius type rheologies where the principal difference between 'strong' and 'weak' forms is a six order of magnitude larger pre-factor. The result of a large reduction in the strength of the lower crust is to delay melt generation and reduce the melt production rate. For the strong model focused strain results in a narrow, shallow region of partial melting and a rapid reduction in light REE concentrations. For the weak model extension is more distributed resulting in a period of time where melting is held at depth due to the protracted thinning of the crustal lid. This reduces the melt production rate and the rate of change in composition. The difference in melt generation only exists during rifting: all models reach the same steady-state as this is a function of mantle temperature. In Afar, kinematic reconstructions would suggest that the onset of extension becomes younger in the north as the region 'un-zipped'. Our model implies that the younger Erta Ale segment has a strong crust, extension is focused and current magmatism represents the first signs of melting (given the light REE enrichment). To the south the onset of extension is older, the crust is weaker and melting is somewhat restricted to deeper depths. Volcanism during break-up is therefore influenced by crustal rheology. 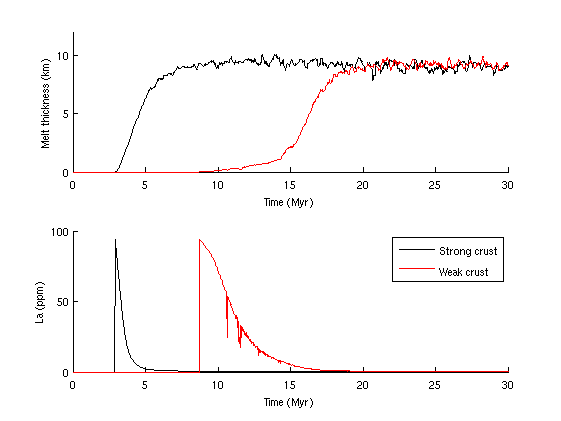