Dynamic compression of matter induced by powerful lasers allows exploring extreme states beyond the static limit of the diamond anvil cell, to mimic the conditions of the interior of the earth and the other planets. These are “exotic” states of matter like the Warm Dense Matter (WDM) [1] where most of the approximations used in condensed matter physics or in plasma physics break down.

We report here the first laser shocked Fe K-edge XAFS data measured on a synchrotron beamline using a single X-ray pulse. Generally such experiments are carried out on a much bigger scale using high power kJ lasers where two orders of magnitude more energy is needed [2].

Linking a portable 40J laser to one of the ESRF’s recently upgraded beamline ID24, solid-solid and solid-liquid phase transitions of iron under extreme pressure and temperature could be observed using single shot XANES and EXAFS. The extremely small x-ray beam available at ID24 (5x5 µm) allows focusing the laser so that the power on the sample can reach the 1013 W/cm2 range. The evolution of the thermodynamical conditions during the shock could be probed by varying the laser – X-ray delay. The shock lifetime in the iron target was confined for a few ns using a pair of diamonds windows, providing a time window sufficiently large for the 100 ps synchrotron pulse to probe thermodynamically stable states reaching 370 GPa and 10000 K, as estimated by hydrodynamic simulations.

The quality of the data collected on shocked Fe using a single X-ray pulse is similar to that obtainable at ambient conditions. This first experiment demonstrates the feasibility of these studies at a synchrotron beamline, and opens many exciting opportunities for probing the local and electronic structure in very dense states of matter. Dynamic compression experiments thus will in the future become more accessible and profit from the extremely stable X-ray diagnostics of synchrotron beamlines. 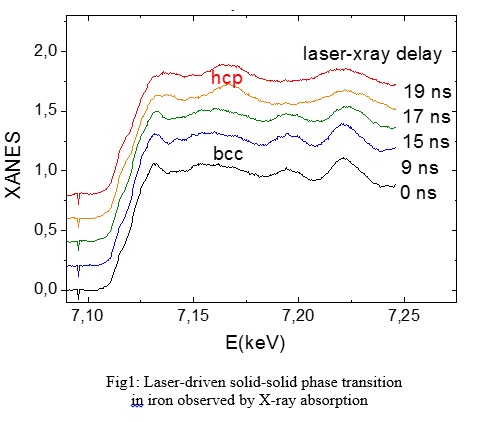