B33C-0179:
Making the Use of Remote Sensing for Agricultural Subsidy Control More Effective: Automatizing Photo Interpretation of Satellite Imagery over Southern Portugal in the Context of the European Common Agriculture Policy

Control with Remote Sensing (CwRS) is a standardized control method that has been developed by the Monitoring Agriculture Resources (MARS Unit) of the European Commission's Joint Research Centre (JRC). It relies on remote sensing time series data and is officially recognized by the EU as equivalent to actual farm visits. Member states agencies use CwRS to carry out part or all of their on-the-spot controls of EU farms to monitor Common Agriculture Policy (CAP) subsidies. The main component of CwRS is Computer-Aided Photo-Interpretation (CAPI), whose goal is determining the crop occupation of agricultural parcels listed in farmers' subsidies applications. In 2012, the CAP CwRS program enabled the oversight of 349,000 farmers for their area-aid applications, representing 89% of the total EU27 required controls.

The goal of this study was to develop a simple and reproducible method to automatize the CAPI process. The main feature of this method is that it allows choosing a confidence level on the automatic classification of farmer’s parcels. While higher confidence levels reduce the risk of misclassifications, lower levels increase the number of automatic control decisions that do not require the intervention of a photo interpreter, reducing the overall CwRS costs.

We used extensive 2005 validated control data from the Portuguese Control and Paying Agency for Agriculture (IFAP) and a multi-temporal Landsat 7 time series to train and test our methodology. Our overall results indicate that for 95% confidence level, approximately 20% of decisions can be taken automatically and for 80% confidence level the percentage of automatic decisions increases to 55%. For each studied land cover class, the adjacent figure shows the effect of the confidence level on the percentage of parcels that can be classified automatically. Since our approach holds for multiple sensors, we believe that the current results will be further improved with additional data. Our results compare favorably with standard pixel-based classifications since we take advantage of the available farmer's declarations, which are by nature object-based. IFAP is currently interested in implementing this procedure in order to reduce CAPI costs. 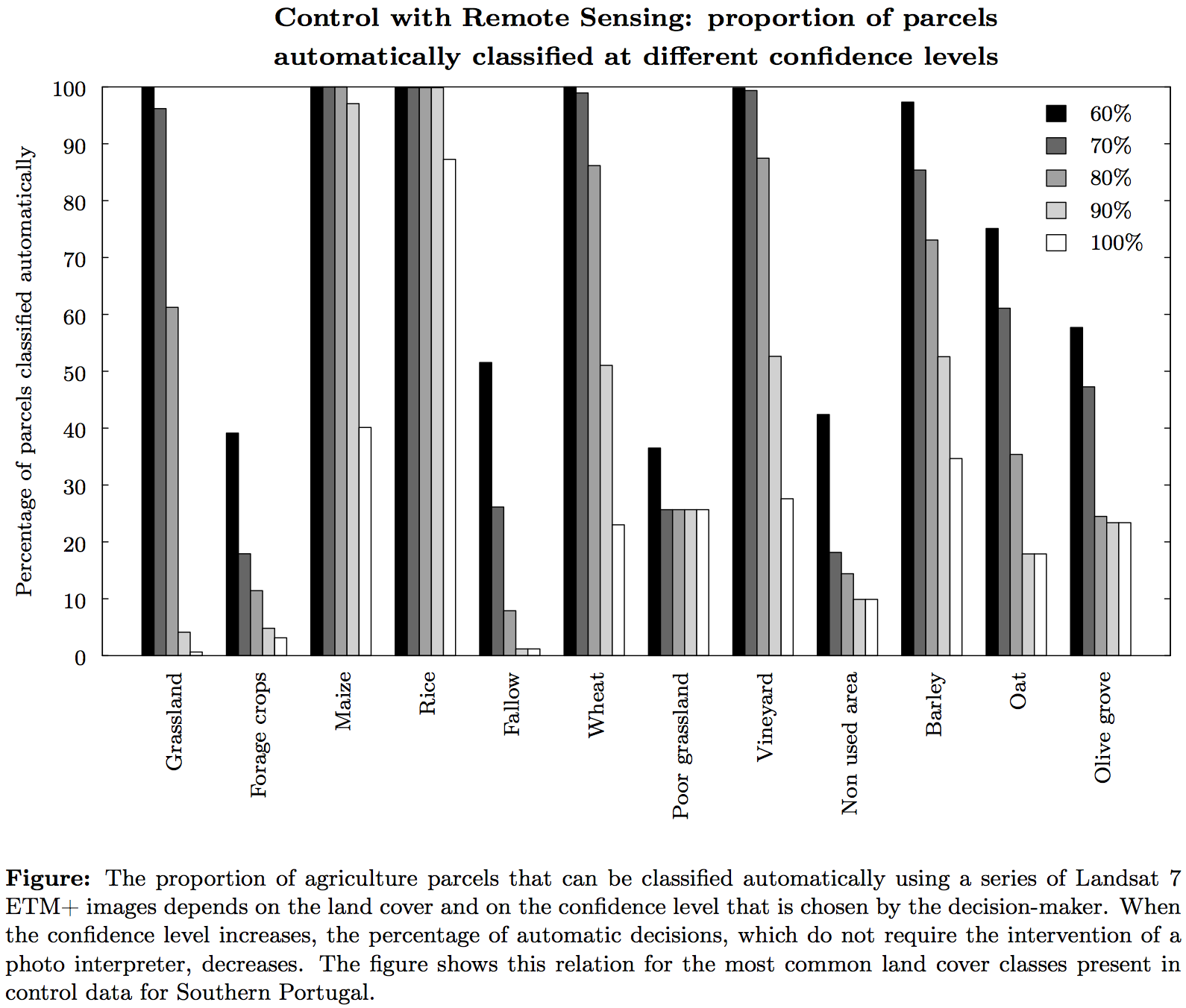