The MSL rover Curiosity acquired images of two large (>1m) boulders that exhibited surface textures and visible/near-infrared spectra (445-1012nm) consistent with iron meteorites, similar to those observed by the Mars Exploration Rover (MER) missions. The rocks were first observed on Sol 634 from ~110m distance and subsequently imaged on Sol 637 using Mastcam and the Remote Micro-Imager (RMI) on ChemCam. The rock “Lebanon” was observed from ~43m, and the rock “Littleton” from ~63m, revealing lustrous blue-gray color and small surface pits consistent with regmaglypts. On Sol 640, Lebanon (at ~12m distance), a nearby fragment, and Littleton (~36m) were imaged with Mastcam at 3 times of day. This included multispectral images of Lebanon along with a 6-frame RMI mosaic and a single position on Littleton. After a ~1.5 m drive closer to the rocks, additional Mastcam images were obtained prior to departure.

At high resolution the surfaces were smooth with mm-scale, intermittent pockmarks. Collections of sand within regmaglypts suggested previous episodes of at least partial burial and exhumation. Mastcam reflectance spectra were red-sloped, with variations <550nm related to specular reflections, similar to laboratory spectra of iron meteorites (and MER spectra of similar rocks). The rocks did not exhibit the cavernous weathering or purple-hued, patchy coatings associated with meteorites observed by MER. The lack of such physio-chemical weathering may be consistent with the less acidic environments postulated for Gale Crater rocks.

The close proximity of these rocks suggests they were part of the same fall. The lack of an associated impact crater suggests the event was either unable to create an impact crater (e.g., low angle entry through a thicker atmosphere), or the rocks survived after erosion of associated impact structure(s). Iron meteorites such as these may therefore provide “witness plates” to processes and environments experienced in this region since their arrival. 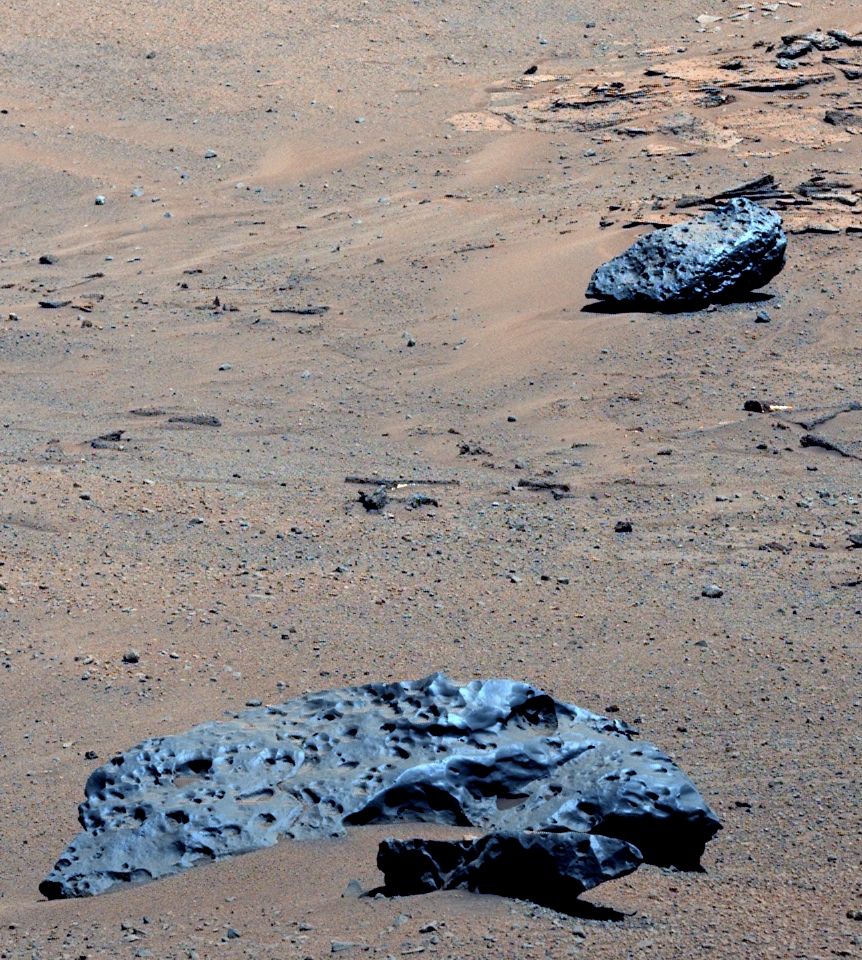