B23E-0274:
Effect of Ship Noise on Mating Behavior of the Plainfin Midshipman Fish.

The calling of the plainfin midshipman (Porichthys notatus) in San Francisco Bay is a prominent feature of the acoustic environment, with its loud mating hums at a fundamental frequency near 100 Hz lasting as much as several hours. Even louder at times is the noise from intense ship traffic in the North Bay. This study aims to determine if noise from ships disrupts the mating behavior of the plainfin midshipman.

We have recorded sound continuously for several years from the Romberg Tiburon Center research pier, close to the North Bay shipping channel. Here passenger ferries pass in front of the site some 36 times a day on weekdays, and tankers and other heavy vessels also frequent this channel. A bottom-mounted hydrophone and computer-based data acquisition system digitize the sound at a sample rate of 2000 Hz. The attached figure shows the spectrogram from one 15-minute data file, starting on July 10, 2013 at 14:36:05 UT (7:36:05 local time). The horizontal lines represent a 111-Hz fundamental frequency and its overtones, and the two broad vertical patterns represent the sounds of two passing ferries. Our study involves analyzing about 30,000 such spectrograms.

The first phase of our study involves a search for ship signals, giving the central time and the half-width for each ship. Then two bands, two standard deviations on either side of the ship position, are searched for a peak in the frequency spectrum between 70Hz and 180Hz, recording the power in the peak. Using these values we have searched for evidence of a change in humming power during or after the ship's passage.

Results from this search will be presented, and implications for successful location of nesting females will be discussed. 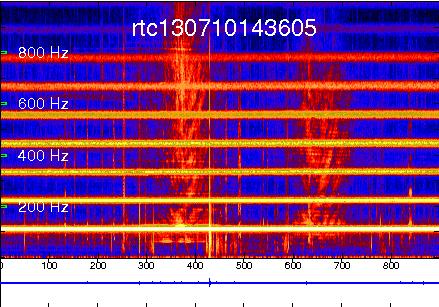