The main goal of NASA's OCO-2 mission is to perform XCO2 column measurements from space with an unprecedented (~1 ppm) precision and accuracy that will enable modelers to globally map CO2 sources and sinks. To achieve this goal, the mission is critically dependent on XCO2product validation that, in turn, is highly dependent on successful use of OCO-2's "target mode" data acquisition. In target mode, OCO-2 rotates in such a way that, as long as it is above the horizon, it looks at a Total Carbon Column Observing Network (TCCON) station equipped with a powerful Fourier Transform spectrometer.

TCCON stations measure, among other things, XCO2by looking straight at the Sun. This translates to a far simpler forward model for TCCON than for OCO-2. In the ideal world, OCO-2's spectroscopic signals result from the cumulative gaseous absorption for one direct transmission of sunlight to the ground (like for TCCON), followed by one diffuse reflection, and one direct transmission to the instrument—at a variety of viewing angles in traget mode. In the real world, all manner of multiple surface reflections and/or scatterings contribute to the signal. See figure. In the idealized world of the OCO-2 operational forward model (used in nadir, glint and target modes), the horizontal variability of the scattering atmosphere and reflecting surface are ignored, leading to the adoption of a 1D vector radiative transfer (vRT) model. This is the source of forward model error that we are investigating, with a focus on target mode.

In principle, atmospheric variability in the horizontal plane—largely due to clouds—can be avoided by careful screening. Also, it is straightforward to account for angular variability of the surface reflection model in the 1D vRT framework. But it is not clear how unavoidable horizontal variations of the surface reflectivity affects the OCO-2 signal, even if the reflection was isotropic (Lambertian). To characterize this OCO-2 "adjacency" effect, we use a simple surface variability model with a single spatial frequency in each direction, and a single albedo contrast at a time for realistic aerosol and gaseous profiles. This specific 3D RT error is compared with other documented forward model errors and translated into XCO2 error in ppm, for programatic consideration and eventual mitigation. 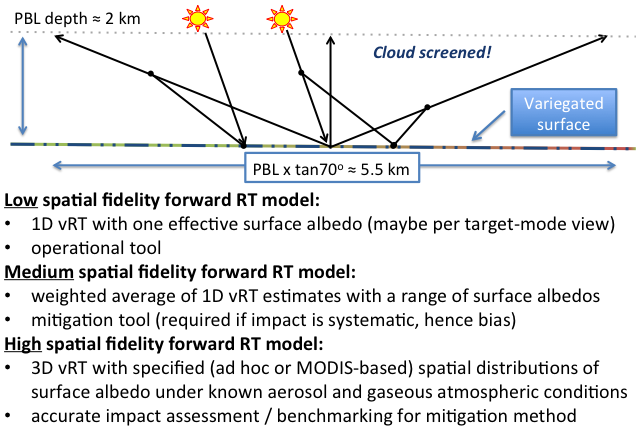