S11C-4354:
The Friction Evolution of Siliceous Rocks during High-Velocity Slip By Thermal Activated Transition from Powder Lubrication and Rolling to Gouge Melting

Experimental analyses of the frictional strength of siliceous rocks (granite, tonalite, and diorite) sheared in a rotary apparatus in the velocity range of 0.002-1 m/s (0.3-7.1 MPa, 0.002 – 1 m/s, total slip up to 60 m) revealed that: (1) During long slip-distances (tens of m) at low to moderate velocity (< 5 cm/s) the friction coefficient evolves with a weakening-strengthening-weakening path (Fig. 1a); and (2) The dependence of the friction coefficient on the slip-velocity is non-monotonous with weakening-strengthening-weakening sections (Fig. 1b) (Reches & Lockner, 2010).

In a typical run with granite (Fig. 1a), the friction coefficient dropped from a static value of 0.86 to a steady value of 0.35 after 2.5 m of slip, followed by a sharp increase to 0.5±0.1 after ~7 m that was maintained for the next 10 m. Then, the friction started to increase again at 17 m to 0.78 at ~20 m, and finally dropped rapidly to 0.4. The first weakening stage (< 2.5m) is associated with formation of cohesive gouge flakes made of mixture of partially hydrated and recrystallized fine-grained gouge (20-50 nm). The top of these flakes displayed cylindrical rolls, 1 micron in diameter, oriented normal to slip, and the macroscopic weakening correlates with the presence of abundant rolls. SEM analysis of fault surfaces at the second weakening stage (> 17m) revealed abundant melt features such as stretched melt drops, melt coating of solid grains and abundant voids in the melt matrix, contrasting with the total melt in high velocity experiments. These friction-distance curves in our granite experiments (e.g., Fig. 1a) bears a similar path of gabbro friction curve at high velocity (Hirose and Shimamoto 2005).

We propose that this non-monotonous friction evolution can be explained as a phase transition from initial pulverization of the brittle stage (low velocity, low normal stress, small slip distance), that leads to powder lubrication by powder rolling, to partial-to-full melting of the thermally activated stage (high velocity, high normal stress, long slip-distance) that leads to weakening by viscous flow. Further, the energy dissipation associated with partial-melting explains the unexpected strengthening for granite faults slipping at velocities of 0.05-0.2 m/s (Fig. 1b). 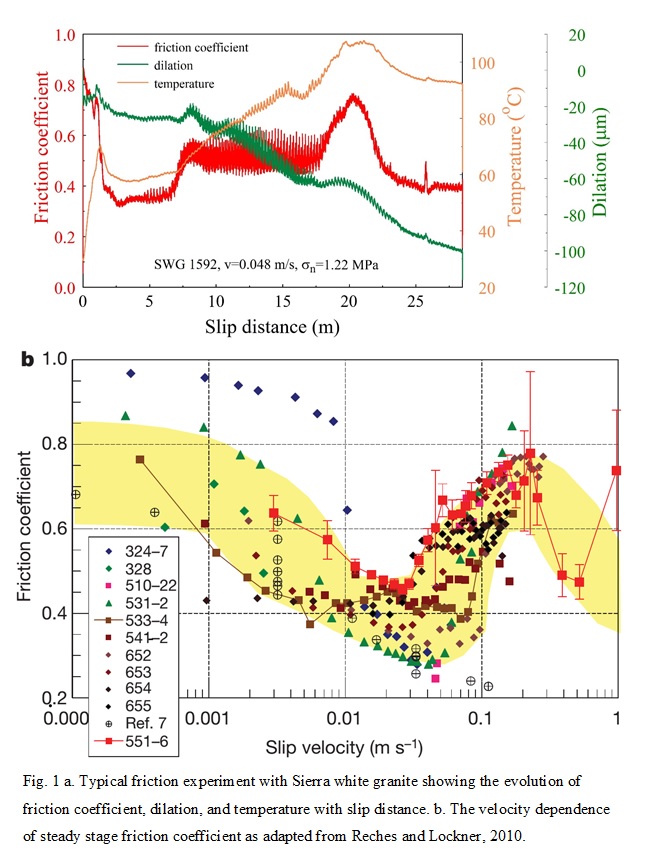