The ergodic hypothesis, implicitly used in virtually all atmospheric boundary layer studies, assumes that the time/space average of a measured flow variable converges to an ensemble of independent realizations from similar initial states and boundary conditions and for sufficiently long sampling times. Turbulent flows within roughness elements such as canopies differ from their classical boundary layer counterparts due to the short-circuiting of the energy cascade and the prevalence of von Karman vortex streets in the deeper layers of the canopy (see Figure). Despite recent experimental support for the validity of the ergodic hypothesis on turbulence statistics in the atmospheric surface layer, the impact of the aforementioned phenomena on the ergodicity of passive scalars within dense canopies remains unexplored. Using Laser Induced Florescence (LIF) measurements and flow visualization of scalar concentration within a rod canopy situated in a flume (see Figure), the necessary conditions for ergodicity of passive scalar turbulence statistics at two different depths were considered. The integral time and length scales were first analyzed and their corresponding maximum values were used to construct an ensemble of (weak) independent realizations. To within experimental limitation, a Kolmogorov-Smirnov test on the distributions of temporal and spatial concentration series against the ensembles revealed that the ergodic hypothesis was reasonable, except close to the rods where wake-induced inhomogeneity and damped turbulence prevail. The spatial concentration statistics within a repeated rod-cell configuration appeared less ergodic than their temporal counterpart given the periodicity and persistence of von Karman vortices on the flow field. Using lagged cross-correlations of scalar concentration time series at different spatial locations, the local advection velocity of dominant eddies was inferred. The computed probability density function of the longitudinal advection velocity agreed with those measured using laser Doppler anemometry velocity time series collected in separate experiments (see Figure). 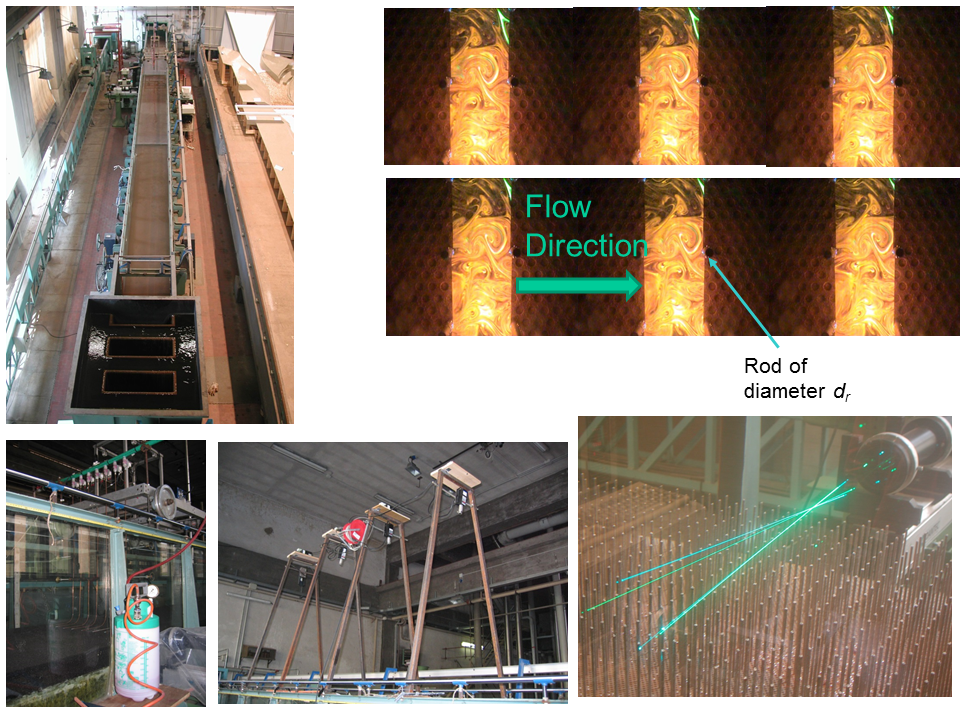