The Aswa Shear zone (ASZ) is a Precambrian lithospheric structure which forms the western margin of the East African Orogeny (EAO) that influenced the evolution of many tectonic events in Eastern Africa including the East African Rift System. It separates the cratonic entities of Saharan Metacraton in the northeast from the Congo craton and the Tanzanian craton and the Kibaran orogenic belt to the southwest. However little is known about its kinematics and the extent and tectonic origin are not fully understood. We developed a new technique based on the tilt method to extract kinematic information from high-resolution airborne magnetic data. We also used radiometric data over Uganda integrated with Shuttle Radar Topography Mission (SRTM) Digital Elevation Model (DEM) in South Sudan to understand the extent, kinematics and define the tectonic origin of ASZ. (1) Our results suggest that the ASZ extends in a NW-SE for ~550 km in Uganda and South Sudan. (2) The airborne magnetic and radiometric data revealed a much wider (~50 km) deformation belt than the mapped 5-10 km of exposed surface expression of the ASZ. The deformation belt associated with the shear is defined by three NW-trending sinistral strike-slip shear zones bounding structural domains with magnetic fabrics showing splays of secondary shear zones and shear-related folds. These folds are tighter close to the discrete shear zones with their axial traces becoming sub-parallel to the shear zones. Similar fold patterns are observed from South Sudan in the SRTM DEM. We interpret these folds as due to ENE-WSW shortening associated with the sinistral strike-slip movement. (3) To the northeast of the shear zone, the magnetic patterns suggest a series of W-verging nappes indicative of strong E-W oriented shortening. Based on the above observations, we relate the evolution of the ASZ to Neoproterozoic E-W collision between East and West Gondwana. This collision produced E-W contraction resulting in W-verging thrusts to the east and a sinistral strike-slip movement along the NW-trending ASZ with strain localization at the boundary between the Saharan Metacraton and the Tanzania craton. This evidence suggests that 1) ASZ lies at the boundary between Sahara Metacraton and Tanzania Craton 2) ASZ is not a product of escape tectonics as previously suggested. 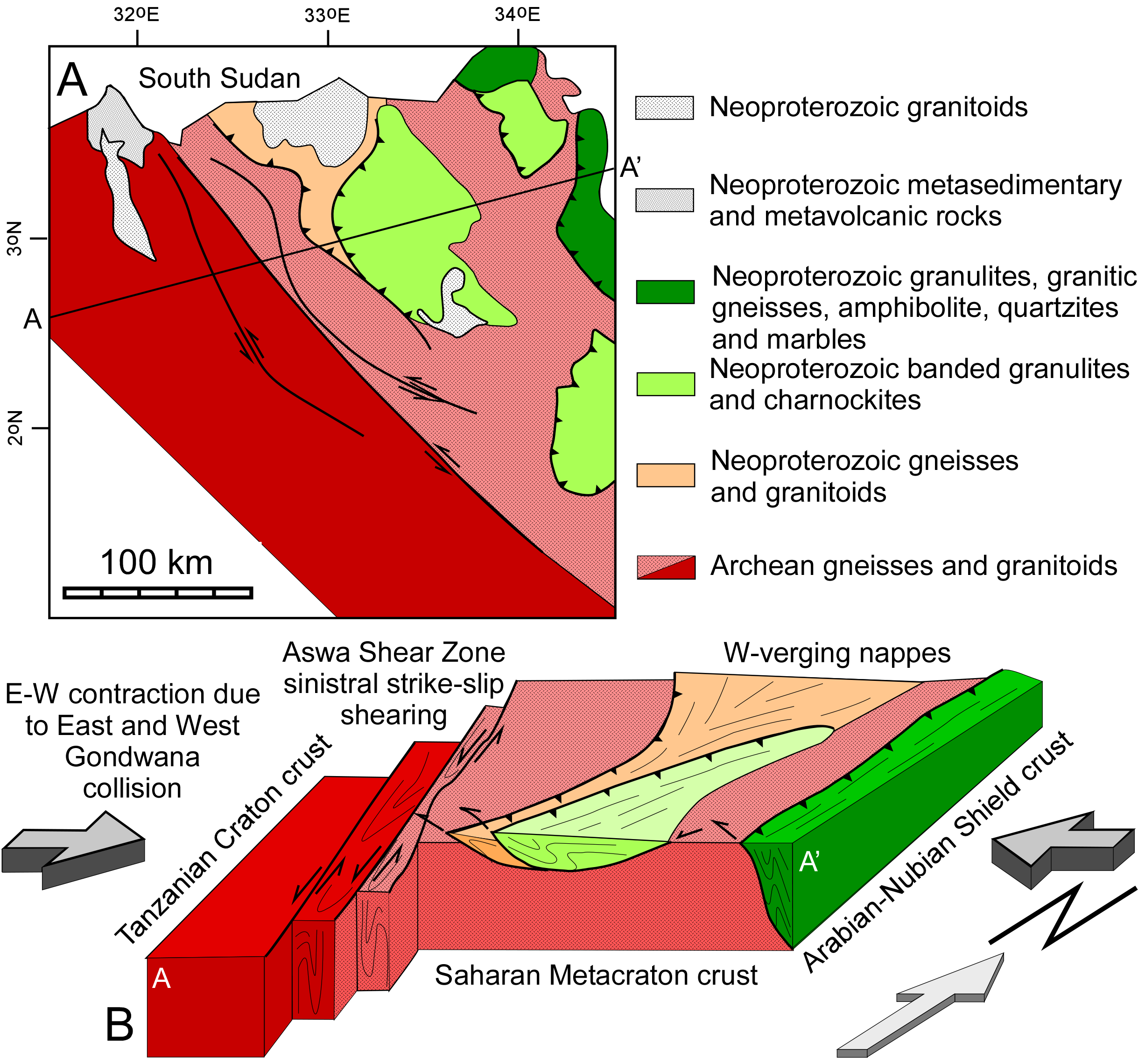