Cost-effective yet safe creation of high-permeability reservoirs inside deep crystalline bedrock is the primary challenge for the viability of enhanced geothermal systems and unconventional oil/gas recovery. Current reservoir stimulation processes utilize brute force (hydraulic pressures in the order of hundreds of bar) to create/propagate fractures in the bedrock. Such stimulation processes entail substantial economic costs ($3.3 million per reservoir as of 2011). Furthermore, the environmental impacts of reservoir stimulation are only recently being determined. Widespread concerns about the environmental contamination have resulted in a number of regulations for fracturing fluids advocating for greener fracturing processes. To reduce the costs and environmental impact of reservoir stimulation, we developed an environmentally friendly and recyclable hydraulic fracturing fluid that undergoes a controlled and large volume expansion with a simultaneous increase in viscosity triggered by CO2 at temperatures relevant for reservoir stimulation in Enhanced Geothermal System (EGS). The volume expansion, which will specifically occurs at EGS depths of interest, generates an exceptionally large mechanical stress in fracture networks of highly impermeable rock propagating fractures at effective stress an order of magnitude lower than current technology. This paper will concentrate on the presentation of this CO2-triggered expanding hydrogel formed from diluted aqueous solutions of polyallylamine (PAA). Aqueous PAA-CO2 mixtures also show significantly higher viscosities than conventional rheology modifiers at similar pressures and temperatures due to the cross-linking reaction of PAA with CO2, which was demonstrated by chemical speciation studies using in situ HP-HT 13C MAS-NMR. In addtion, PAA shows shear-thinning behavior, a critical advantage for the use of this fluid system in EGS reservoir stimulation. The high pressure/temperature experiments and their results as well as the CFD modeling are presented in a companion paper. 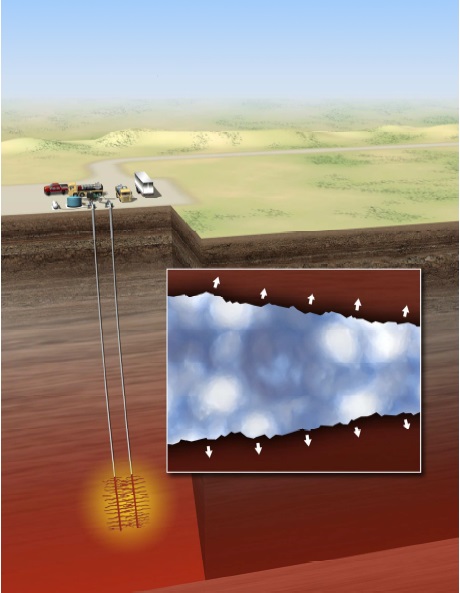