This paper presents a comprehensive analysis of meteorological drought phenomenon in Gandaki River Basin of Central Nepal using Standardized Precipitation Index (SPI) computed at different time scales: 3, 6, 12 months and for monsoon (4 month SPI, June to September) and winter (3 month SPI, December to February) seasons. The study based on high-resolution (0.05 degree) daily precipitation data produced by APHRODITE’s Water Resources project obtained from Department of Hydrology and Meteorology, Government of Nepal. SPI were computed using monthly precipitation data from 1961 to 2004 for 78 APHRODITE precipitation stations around the basin. According to the trend analysis, most of the stations are characterized by increasing SPI value for all time scales which indicate decreases in drought magnitude in GRB. But few stations at High Mountain show significant decreasing trend. The Principle component analysis is also applied to SPI time series and it enabled to identify the spatial disparities in drought. The areas having high annual precipitation have increasing trends in SPI value and area having low annual precipitation have decreasing trend in SPI value for all time scales. This implies that wet areas are becoming wetter and dry areas are becoming dryer in the basin, which affects the smallholder and subsistence farmers the most. 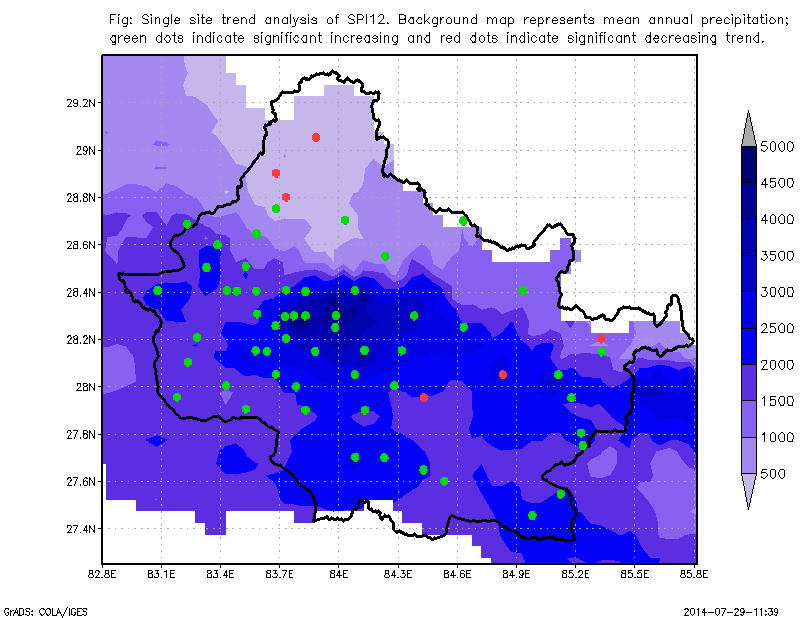