ISCO (In Situ Chemical Oxidation) has been proved to be a useful remediation technology in destroying most prevalent aqueous organic contaminants. For permanganate (MnO4-) in particular, the chemistry of degradative oxidation is well established for cleaning up groundwater containing trichloroethene (TCE) and tetrachloroethene (PCE). However the long-term effectiveness of the application of this oxidant has been questioned due to the observed post remediation rebound of contaminant concentrations. To improve the efficiency of ISCO using MnO4-under specific site conditions, the technology of emplacing slow-releasing permanganate in an aquifer has been studied.

We have developed an injectable slow-release permanganate slurry/gel (ISRPG) by mixing KMnO4 with fumed silica in water. Ideally, the slurry/gel forms would release low concentration of MnO4- by diffusion to maintain a desired concentration level of the agent within the chemically active zone. We have investigated the properties and tested the application of this ISRPG in laboratory studies. Rheological study indicated ISRPG has high viscosity and shear thinning property. The viscosity of silica gel could be lowered by mechanical mixing thus making it easy for subsurface injection. Batch tests revealed that MnO4- was diffused from ISRPG and the gel did not disperse but maintained its initial shape. In column experiments we showed that permanganate release covered 6 times more effluent pore volumes when ISRPG was injected compared to MnO4- solution injection. We also observed TCE degradation by released MnO4-, and the remedial performance occurred over a much longer timeframe with ISRPG compared to MnO4- solution injection. In 2-D flow cell tests we demonstrated that water flows around the injected gel, carrying MnO4- diffused out from the gel and forming a downstream oxidant plume, while the gel was stationary. ISRPG slowly released low concentrations of permanganate to maintain a predetermined level of the agent within the chemically active zone. 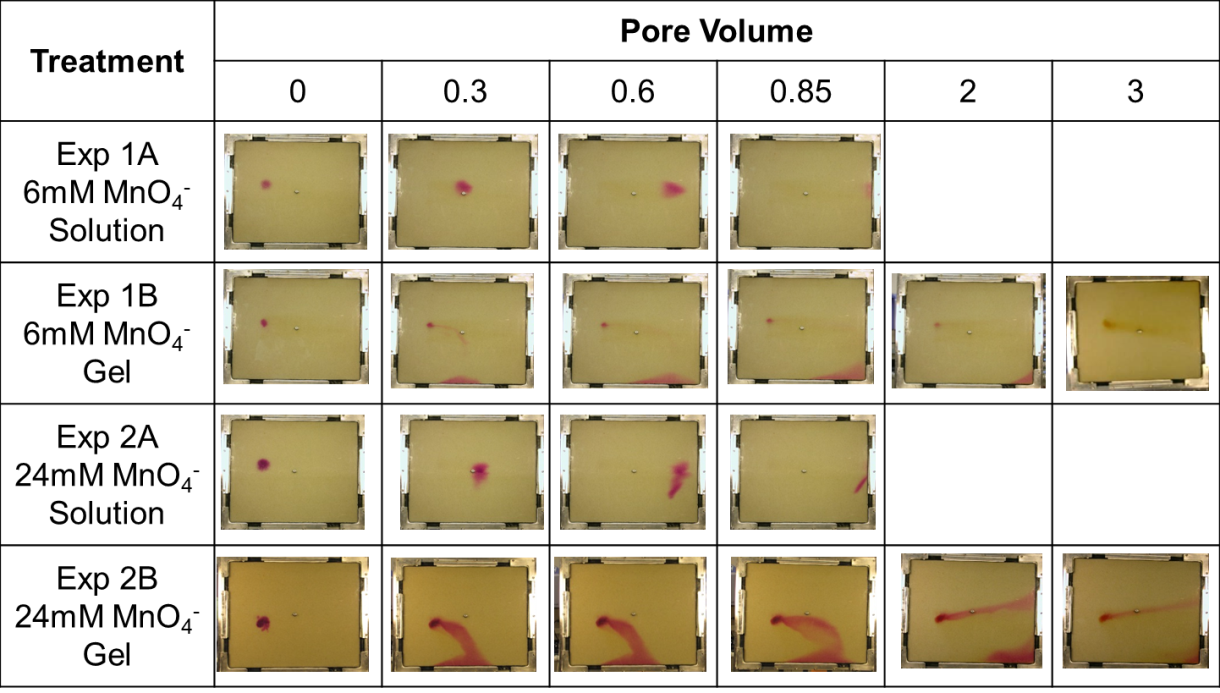