We modeled the electrical transport behavior of dual-pore carbonate rocks in this paper. Based on experimental data of a carbonate reservoir in China, we simply considered the low porosity samples equivalent to the matrix (micro-pore system) of the high porosity samples. For modeling the bimodal porous media, we considered that the matrix is homogeneous and interconnected. The connectivity and the pore size distribution of macro-pore system are varied randomly. Both pore systems are supposed to act electrically in parallel, connected at the nodes, where the fluid exchange takes place, an approach previously used by Bauer et al. (2012). Then, the effect of the properties of matrix, the pore size distribution and connectivity of macro-pore system on petrophysical properties of carbonates can be investigated. We simulated electrical current through networks in three-dimensional simple cubic (SC) and body-center cubic (BCC) with different coordination numbers and different pipe radius distributions of macro-pore system. Based on the simulation results, we found that the formation factor obeys a “universal” scaling relationship (i.e. independent of lattice type), 1/F∝eγz, where γ is a function of the normalized standard deviation of the pore radius distribution of macro-pore system and z is the coordination number of macro-pore system. This relationship is different from the classic “universal power law” in percolation theory. A formation factor model was inferred on the basis of the scaling relationship mentioned above and several scale-invariant quantities (such as hydraulic radius rH and throat length l of macro-pore). Several methods were developed to estimate corresponding parameters of the new model with conventional core analyses. It was satisfactorily tested against experimental data, including some published experimental data. Furthermore, the relationship between water saturation and resistivity in dual-pore carbonates was discussed based on the new model. 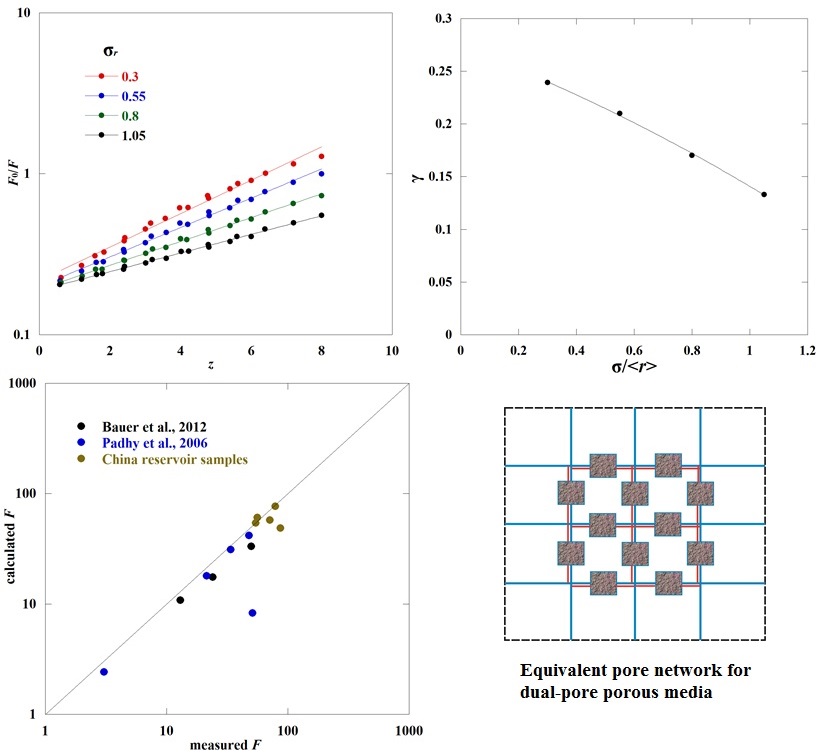