Our group designed and built working web, android, and IOS applications using different mapping libraries as bases on which to overlay fire data from NASA. The group originally planned to make app versions for Google Maps, Leaflet, and OpenLayers. However, because the Leaflet library did not properly load on Android, the group focused efforts on the other two mapping libraries. For Google Maps, the group first designed a UI for the web app and made a working version of the app. After updating the source of fire data to one which also provided historical fire data, the design had to be modified to include the extra data. After completing a working version of the web app, the group used webview in android, a built in resource which allowed porting the web app to android without rewriting the code for android. Upon completing this, the group found Apple IOS devices had a similar capability, and so decided to add an IOS app to the project using a function similar to webview. Alongside this effort, the group began implementing an OpenLayers fire map using a simpler UI. This web app was completed fairly quickly relative to Google Maps; however, it did not include functionality such as satellite imagery or searchable locations. The group finished the project with a working android version of the Google Maps based app supporting API levels 14-19 and an OpenLayers based app supporting API levels 8-19, as well as a Google Maps based IOS app supporting both old and new screen formats. This project was implemented by high school and college students under an SGT Inc. STEM internship program 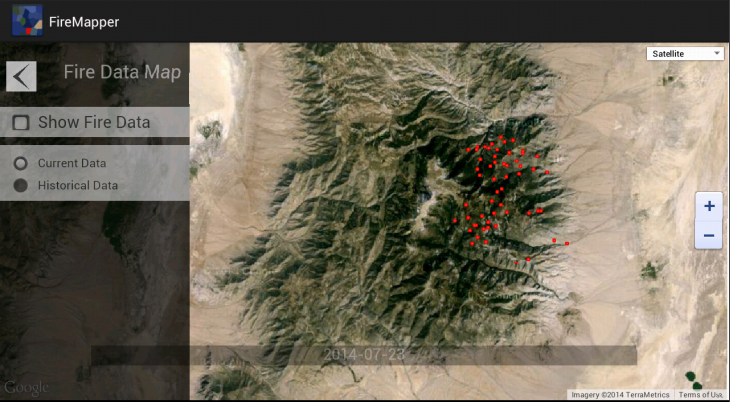