G41B-0477:
Improvement of the Earthquake Early Warning System with Wavefield Extrapolation with Apparent Velocity and Direction

The early warning system operated by Japan Meteorological Agency (JMA) has been available in public since October 2007.The present system is still not effective in cases, that we cannot assume a nearly circular wavefront expansion from a source. We propose a new approach based on the extrapolation of the early observed wavefield alone without estimating its epicenter. The idea is similar to the migration method in exploration seismology, but we use not only the information of wave field at an early stage (i.e., at time T2 in Figure, but also its normal derivatives the difference between T1 and T2), that is, we utilize the apparent velocity and direction of early-stage wave propagation to predict the wavefield later (at T3 in Fig.).

For the extrapolation of wavefield, we need a reliable Green’s function from the observed point to a target point at which the wave arrives later. Since the complete 3-D wave propagation is extremely complex, particularly in and around Japan of highly heterogeneous structures, we shall consider a phenomenological 2-D Green’s function, that is, a wavefront propagates on the surface with a certain apparent velocity and direction of P wave. This apparent velocity and direction may vary significantly depending on, for example, event depth and an area of propagation, so we examined those of P wave propagating in Japan in various situations. For example, the velocity of shallow events in Hokkaido is 7.1km/s while that in Nagano prefecture is about 5.5km/s. In addition, the apparent velocity depends on event depth, 7.1km/s for the depth of 10km and 8.9km/s for 100km in Hokkaido.

We also conducted f-k array analyses of adjacent five or six stations where we can accurately estimate the apparent velocity and direction of P wave. For deep events with relatively simple waveforms, they are easily obtained, but we may need site corrections to enhance correlations of waveforms among stations for shallow ones.

In the above extrapolation scheme, we can only estimate the arrival times of P wave at remote stations, but we need to estimate S wave arrival time and intensity in practice. We compare the actual S wave arrival times with P wave ones for various epicenter distances, event depths and regions, so that some empirical relations between them are listed for our final goal of S wave estimations. 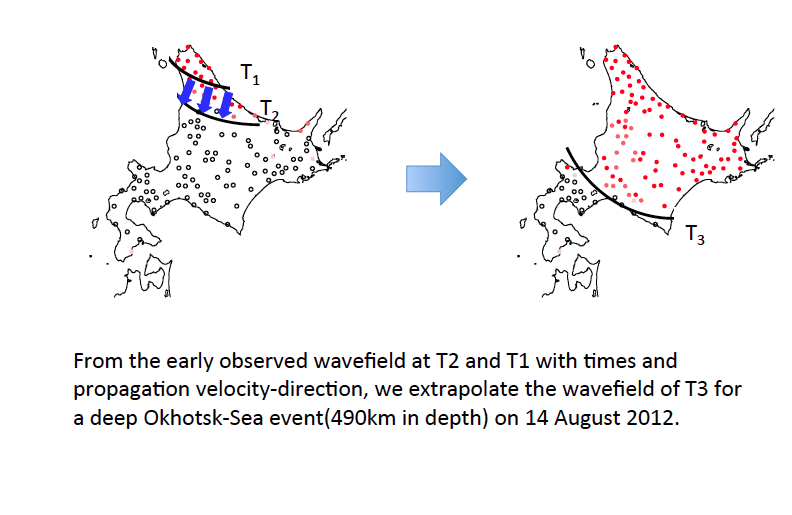