During the past decade, a wide range of insights about the character and causes of extreme orographic precipitation in California has emerged, based on our growing understanding of the presence, mechanisms and impacts of “atmospheric rivers” (ARs) in the extratropical atmosphere. When an AR reaches and encounters the Coastal Ranges and Sierra Nevada of California, the resulting orographically driven storms are key players in many important weather, hydrologic and ecological processes in the State, including floods and floodplain inundations, droughts, groundwater recharge, and surface-water resources (see table). The intensities, storm totals, geographical distributions and impacts of AR storms in California are determined by many factors, including among the most straightforward:

ARs are present in weather forecast models as well as in the long-range climate models used to project future climate changes in response to increasing greenhouse-gas concentrations in the atmosphere. Research into the future of ARs over California was first reported in the literature in 2011 (based on IPCC AR4 climate models) and is being extended now (to IPCC AR5 models) to assess projected changes in the full range of factors listed above with the aim of predicting how climate change will affect these important storms and their impacts in coming decades. 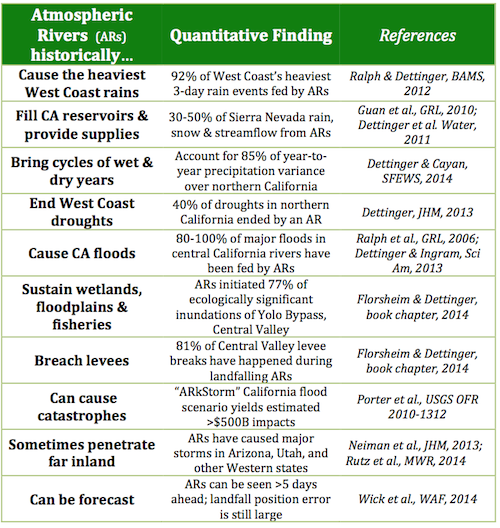