Models of microbial dynamics coupled to solute transport in aquifers typically require the introduction of a bacterial carrying capacity term to prevent excessive microbial growth close to substrate-injection boundaries. The factors controlling this carrying capacity, however, are not fully understood. Most explanations for the occurrence of a carrying capacity discussed are based on the assumption of a bottom-up control of groundwater ecosystems. An alternative explanation is based on top-down control. Our model considers substrate, bacteria and higher trophic levels, such as grazers or bacteriophages. The dissolved substrate is transported with water flow whereas the biomasses of bacteria and grazers are considered essentially immobile. The one-dimensional reactive transport model also accounts for substrate dispersion and a random walk of grazers influenced by the bacteria concentration. The grazers grow on the bacteria, leading to a negative feedback on the bacteria concentration which may limit the turnover of the substrate.

A single retentostat model with Monod kinetics of bacterial growth and a second-order grazing shows that the system oscillates but approaches a stable steady state with non-zero concentrations of substrate, bacteria, and grazers. The steady-state concentration of the bacteria biomass is independent of the substrate concentration in the inflow. When coupling several retentostats in a series to mimic a groundwater column, the steady-state bacteria concentrations remain at a constant level over a significant travel distance. The results show that grazing is a possible explanation of the carrying capacity, provided that there is enough substrate to sustain bacteria and grazers. 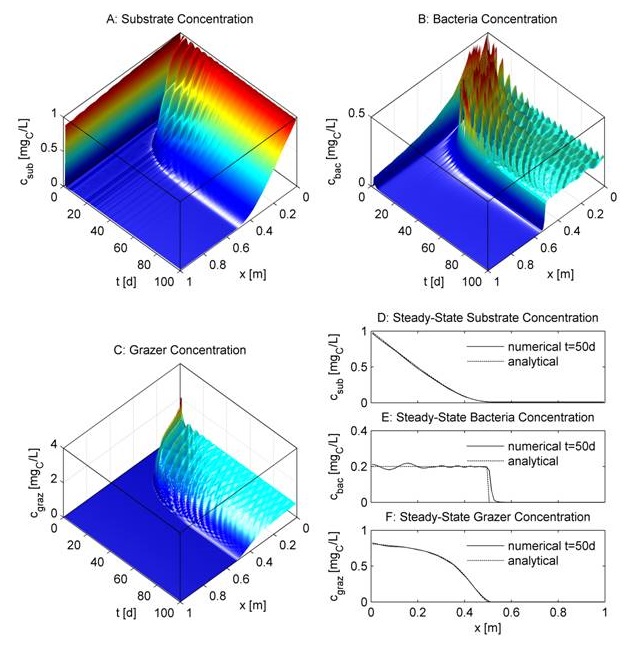