Cumulus cloud populations remain at least partially unresolved in present-day numerical simulations of global weather and climate, and accordingly their impact on the larger-scale flow has to be represented through parameterization. Various methods have been developed over the years, ranging in complexity from the early bulk models relying on a single plume to more recent approaches that attempt to reconstruct the underlying probability density functions, such as statistical schemes and multiple plume approaches. Most of these "classic" methods capture key aspects of cumulus cloud populations, and have been successfully implemented in operational weather and climate models. However, the ever finer discretizations of operational circulation models, driven by advances in the computational efficiency of supercomputers, is creating new problems for existing sub-grid schemes. Ideally, a sub-grid scheme should automatically adapt its impact on the resolved scales to the dimension of the grid-box within which it is supposed to act. It can be argued that this is only possible when i) the scheme is aware of the range of scales of the processes it represents, and ii) it can distinguish between contributions as a function of size. How to conceptually represent this knowledge of scale in existing parameterization schemes remains an open question that is actively researched.

This study considers a relatively new class of models for sub-grid transport in which ideas from the field of population dynamics are merged with the concept of multi plume modelling. More precisely, a multiple mass flux framework for moist convective transport is formulated in which the ensemble of plumes is created in “size-space”. It is argued that thus resolving the underlying size-densities creates opportunities for introducing scale-awareness and scale-adaptivity in the scheme. The behavior of an implementation of this framework in the Eddy Diffusivity Mass Flux (EDMF) model, named ED(MF)n, is examined for a standard case of subtropical marine shallow cumulus. We ask if a system of multiple independently resolved plumes is able to automatically create the vertical profile of bulk (mass) flux at which the sub-grid scale transport balances the imposed larger-scale forcings in the cloud layer. 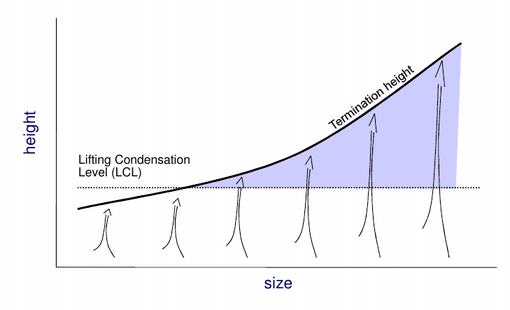