Recent seismological observations have highlighted increasing foreshock activity preceding the failure of large earthquakes. Foreshock sequences are the signature of a precursory slip during the nucleation of earthquakes, as observed both prior the Tohoku-Oki Mw 9.0 and the recent Iquique 2014 Mw 8.1 earthquakes. However, foreshocks are not systematic and the reason why they occur remains poorly understood. Recent advances in laboratory experiments allow to mimic seismic ruptures and to study the earthquake nucleation phase. Here, we track the occurrence of foreshocks prior to stick-slip instabilities in crustal rocks.

Here we present the results of 6 experiments on saw cut granite samples submitted to triaxial loading under in-situ upper crustal condition that provide additional clues to understand the physical processes of foreshock dynamics. We obtained a catalog of more than 200 stick-slip cycles, composed of loading period and mainshock. Thirty STick-slip Events (STE) are preceded by a foreshock sequence. The moment and location of the 900 measured foreshocks are obtained using acoustic emission (AE) monitoring. We systematically observed that (i) the static friction coefficient, (ii) the stress drop and, consequently, (3) the moment magnitude (and total seismic slip) of the mainshock increases with increasing σn.

In our experiments, an exponential acceleration of the precursory slip is systematically observed, but foreshocks are only observed when the normal stress becomes greater than 55MPa. This threshold corresponds to the normal stress above which the nucleation length becomes comparable to the size of typical fault asperities. In these conditions, the total cumulative moment of the foreshock sequence also increases exponentially up to failure, and the fault surface evolves like a cascading asperity model. This exponential growth implies that the nucleation phase has a characteristic time, i.e. that the foreshock sequence duration and moment release scales with the size of the main asperity which is eventually going to rupture. 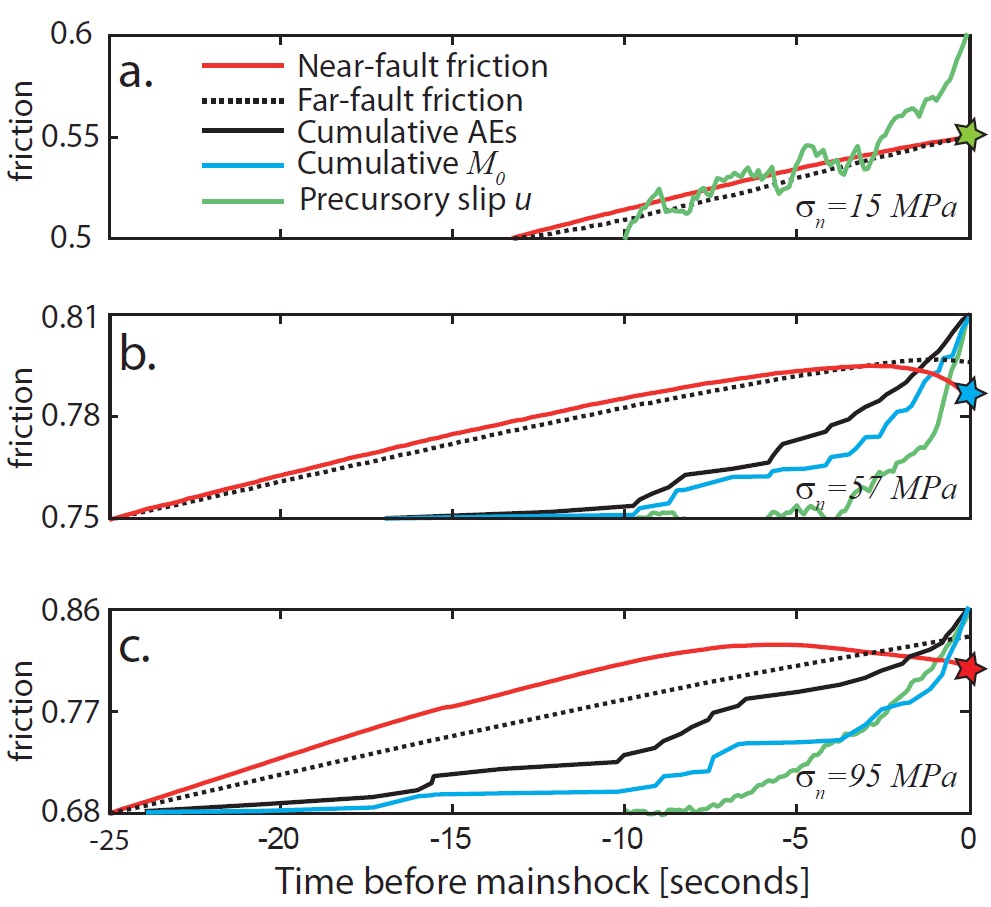