Prelaunch polarization characterization indicates that the polarization sensitivity in bands M1-M4 of the Visible and Infrared Imaging Radiometer Suite (VIIRS) onboard the Joint Polar Satellite System–1 (JPSS-1, J1) is higher than the performance specifications. It is important to understand its impacts on the sensor data records (SDR) for reliable environment data records retrieval. This study focuses on assessments of the impacts of J1 VIIRS polarization sensitivity on bands M1-M4 SDRs, especially M1, (0.411μm) in which degree of linear polarization (DoLP) due to Rayleigh scattering and instrument polarization sensitivity are more profound than other bands. In this study, we adopts a MODIS polarization correction method proposed by Meister et al. (2005) for J1 VIIRS. Polarization impact (in percent) is defined as (Im-It)/It*100, where Im is J1 measured top of atmosphere (TOA) reflectance and Itis the true TOA reflectance measured by an ideal instrument without polarization sensitivity. J1 VIIRS was assumed to have the same along track and along scan patterns and local equator crossing time as that of the Suomi NPP VIIRS. Clear-sky Stokes vectors for the Rayleigh component were simulated using the Second Simulation of a Satellite Signal in the Solar Spectrum Vector Code, version 1 (6SV) for representative NPP VIIRS orbits over the Pacific Ocean. J1 VIIRS prelaunch polarization sensitivity data, including polarization amplitude and phase angle for each band, HAM-side, detector, and scan angle, were obtained from the NASA VIIRS Calibration Support Team.

Figure 1 shows band M1 DoLP derived from 6SV simulated Stokes vectors for a NPP VIIRS orbit over the Pacific Ocean on April 17, 2014 and the impacts of J1 polarization sensitivity on TOA reflectance for the granule over the MOBY site. The impact on band M1 TOA reflectance can be as large as ~4% at the end of scans (western side of the bottom right image), where DoLP reaches ~70% and the J1 polarization amplitude is close to 6%. Moreover, large striping (~4%) can also be observed at the same region in the granule due to HAM-side and detector level polarization sensitivity differences. The method will be applied to bands M2-M4 and more representative granules over ocean. 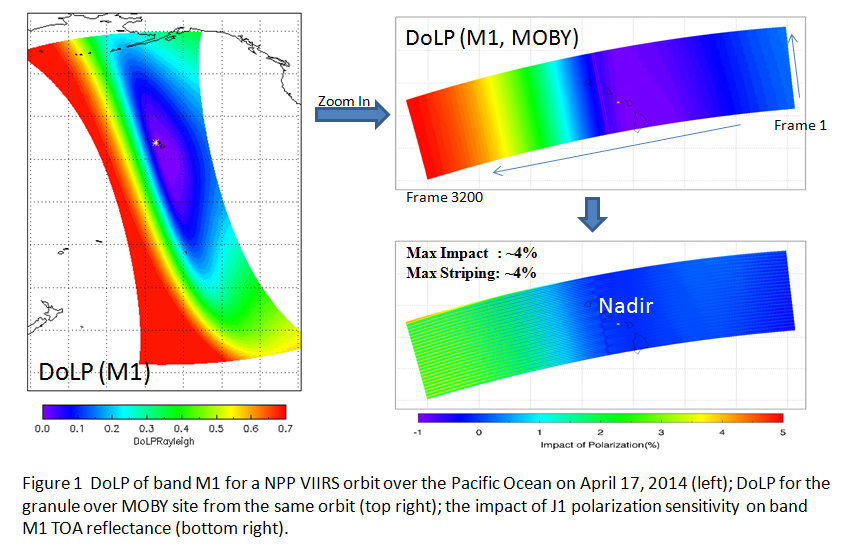