P23A-3974:
Darkness on the Edge of Light: Stable Dark Spots in Jupiter’s Ionosphere

We present the detection of dark regions in the jovian sub-auroral H3+ emission, first observed in recent December 2012 observations of Jupiter's aurora using CRIRES/VLT and confirmed to be stable on long timescales using a re-analysis of auroral images taken by J. Connerney and T. Satoh as a part of their 1995-2000 NSFCam/IRTF observations of the aurora.

While the auroral region of Jupiter has been studied in great detail, the region equatorward of this has long been thought of as a gently gradated boundary region, with reduced emission towards Jupiter's equator. However, this new detection reveals what appears to be highly localised variable emission: dark regions with sharp boundaries and distinct shapes, offset from the auroral region. These dark features are broadly stable in both magnetic longitude and latitude over timescales of more than fifteen years, and yet vary in small-scale morphology over timescales of less than a month. This changing H3+ emission could represent the localised destruction of H3+, producing a reduction in H3+ density or, alternatively, a cooling of the co-located neutral atmosphere may be reducing the thermalised H3+ emission.

However, what planetary process drives such changes is not clear. These unexplained features cannot be weather systems propagating from lower altitudes, as lower altitude weather systems generally drift along latitudinally bound bands, and these features are fixed in longitude over seasonal timescales. This strongly suggests a magnetospheric origin for the dimming. Perhaps the lack of emission is comparable to the 'Ring Rain' features seen in Saturn's equatorial regions. However, since these dark spots are confined to specific longitudes, unlike the bands of emission seen at Saturn, and their morphology appears to change with time, it is difficult to assign a magnetospheric source that would cause such a reduction in either H3+ density or temperature. Alternatively, the darkening may represent previously unobserved dynamics within the sub-auroral upper atmosphere, driven, and held in place, by auroral processes, resulting in thermospheric weather that is stable on long timescales. Either of these strongly suggests a long-term control of the non-auroral upper atmosphere of Jupiter by the surrounding space environment. 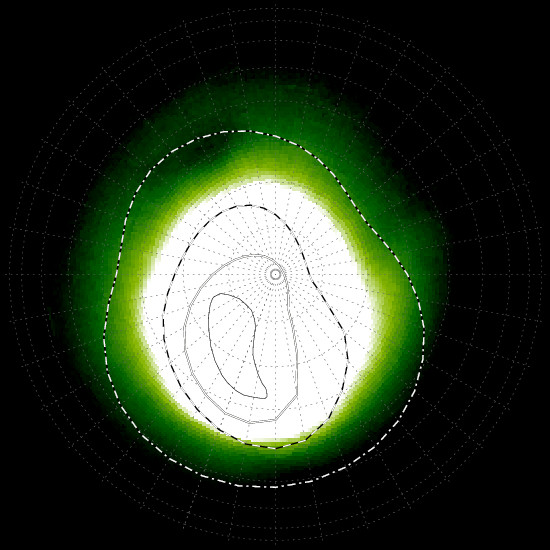