The conservative hydrodynamic interactions between short and long surface waves are well known, but only a limited range of solutions have been investigated. Here we demonstrate theoretically and numerically a new instability that produces an exponential grown of the maxima of short wave action and steepness in the presence of long monochromatic waves. This instability requires the non-linear combination of phase speed and wave action modulations to produce a ratchet-like growth of a wave packet that progressively focuses when passing over a long wave crest and can reach a maximum normalized amplification 10 times the linear modulation value predicted by Longuet-Higgins and Stewart (LH&S, 1964). This is illustrated in the attached figure that shows the normalized action of short waves when passing the crest of long waves, for the case of waves 10 times shorter than the dominant waves, with a long wave steepness of 0.1. This instability is of particular interest because it should lead to a higher probability of breaking for short waves propagating in directions within 30 degrees of dominant waves direction.

A preliminary parameterization combined with a saturation-based dissipation of this effect provides an effective explanation for the empirical dissipation used in the energy balance and effectively enhances the bimodality around 1 m wavelength, making the modeled spectra closer to observed young wave spectra, and modulation of short wave breaking. This parameterized preferred breaking is found to have a strong impact on cross-wind and down-wind slope statistics and thus air-sea exchanges and remote sensing.

Simulations of the conservative short wave action evolution shows that the growth rate of this instability is a function of the initial modulation of the short waves by the longer wave. Work is underway to include a wave dissipation effect in these simulations, examine the response to narrow-band random long waves and refine the expected impact on the wave spectrum shape, and produce a seamless parameterization of dissipation that can be used to represent the full range of surface gravity waves for remote sensing and air-sea fluxes applications. It is also expected that further analysis of stereo-video data should support the non-Rayleigh distribution of short wave steepnesses predicted for this type of modulation. 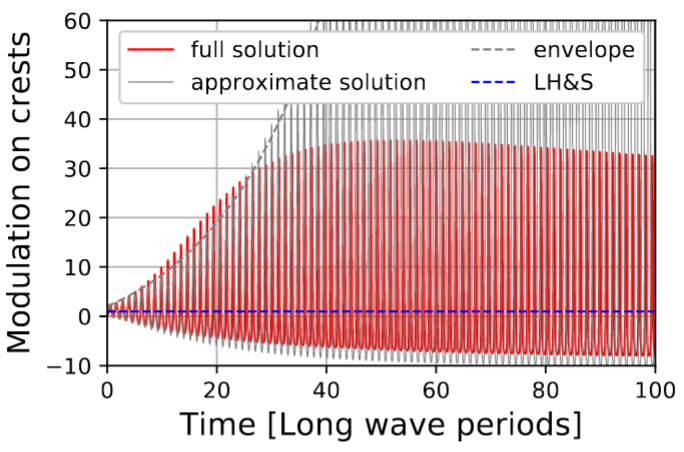 Back to: Wave Breaking in Ocean-Atmosphere Exchanges I