T31C-4615:
Fault-Bend Folding in the Eastern Margin of the Tibetan Plateau and the Seismotectonics of the 2013 Lushan Mw 6.6 Earthquake

Five years after the 2008 Wenchuan megathrust earthquake of Mw 7.9 in the middle Longmen Shan on the east margin of Tibetan Plateau, another thrust earthquake of Mw 6.6 occurred on April 20, 2013 near Lushan County, in the front belt of the southern Longmen Shan. This latter earthquake caused 196 deaths, 21 people missing, and injured 11470 people. Different from the bigger Wenchuan earthquake, this earthquake did not produce a surface rupture zone, and the outcropped faults in the earthquake area were not obviously active in the late Quaternary, which make it difficult to analyse the seismogenic structure. The causal fault was supposed to be the known exposed faults or unknown buried fault, but little is known about the active tectonics in the area. The Qingyijiang River traverses the east margin of Tibetan Plateau and the earthquake area, its relict terraces should have been deformed by the active tectonics. Based on the longitudinal profile of the Qingyijiang River, this study quantitatively analyse the late Quaternary tectonic deformation, and further discussed the seismotectonics. Our study reveals that the principal deformation in the late Quaternary was folding (Fig. 1), while the early Cenozoic folds and thrusts in the Cretaceous to Paleogene strata were not obviously active in the same stage. With oil seismic exploration and aftershocks relocation data, we further discuss the relationship between surface deformation and deep structures. The new folding is inferred to be a typical fault-bend fold involving the basement, which is controlled by the newest flat-ramp-flat structure in front of the Longmen Shan. The newest ramp appears to have controlled the rupture and the surface deformation of the 2013 Lushan earthquake. In the process of thrust sheet sliding towards foreland along the flat-ramp-flat detachment, the ramp acts as a locking structure where earthquake ruptures. The coseismic surface deformation by GPS data seems to be passive folding of the thrust sheet climbing the ramp. 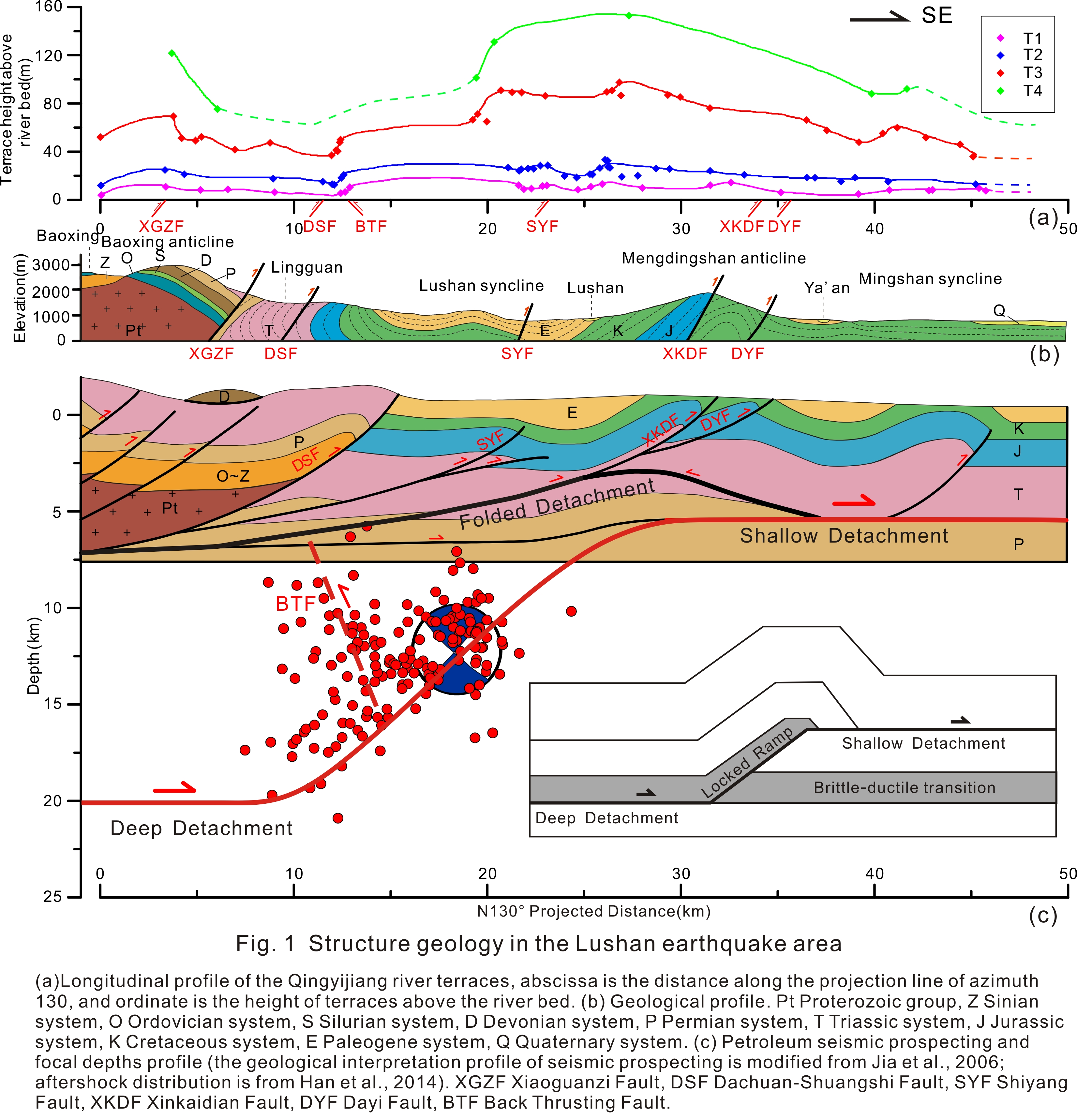