A likely source of earthquake clustering is static and/or dynamic stresses transferred by individual events. Previous attempts to quantify the role of static stress generally considered only the stress changes caused by large events, and often discarded data uncertainties. We test the static stress change hypothesis empirically by considering all events of magnitude M≥ 2.1 and the uncertainties in location and focal mechanism in the focal mechanism catalog for Southern California between 1981 and 2010 (Yang et al., 2011).

We approximate the waiting time distributions empirically by (3), which respectively consists of triggering and background rate components, tapered by an exponential term to model the finiteness of the catalog. We observe that K/(Bc^p ) (the ratio of the triggering to the background rates at t=0), the exponent p, and the Maxwell time τ all increase with |∆CFS| and are significantly larger for positive than for negative ∆CFS’s. τ varies between ~90 days and ~150 days (approximately 0.3 decades over 6 decades of variation in stress). It defines the time beyond which the memory of stress is overprinted by occurrence of other events. The CI values become significant above a threshold |∆CFS|. The mean-field CI is 52%, while the maximum observed CI value is ~60%. Correcting for the focal plane ambiguity, those values become respectively ~55% and ~72%. Lastly, the CI values decrease with the waiting time and converge to the mean-field CI value.

The increase of p-value and K/(Bc^p ) with |∆CFS| contradicts the prediction of stress shadow regions where seismicity is suppressed if ∆CFS<0. Our results rather suggest a spatially ubiquitous triggering process compatible with dynamic triggering, modulated by the sign and amplitude of the static stress field. We also conclude that static stress-based forecasts should not be performed over time scales much larger than τ, which is of the order of few hundred days. 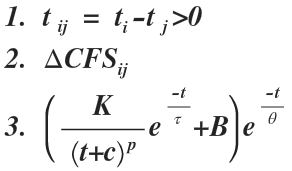