This presentation will address the 24 September 2013 Mw 7.7 Balochistan Earthquake in western Pakistan from the point of view of interferometric processing algorithms of wide-swath TerraSAR-X ScanSAR images. The algorithms are also valid for TOPS acquisition mode, the operational mode of the Sentinel-1A ESA satellite that was successfully launched in April 2014. Spectral properties of burst-mode data and an overview of the interferometric processing steps of burst-mode acquisitions, emphasizing the importance of the co-registration stage, will be provided. A co-registration approach based on incoherent cross-correlation will be presented and applied to seismic scenarios. Moreover geodynamic corrections due to differential atmospheric path delay and differential solid Earth tides are considered to achieve accuracy in the order of several centimeters.

We previously derived a 3D displacement map using cross-correlation techniques applied to optical images from Landsat-8 satellite and TerraSAR-X ScanSAR amplitude images. The Landsat-8 cross-correlation measurements cover two horizontal directions, and the TerraSAR-X displacements include both horizontal along-track and slant-range (radar line-of-sight) measurements that are sensitive to vertical and horizontal deformation. It will be justified that the co-seismic displacement map from TerraSAR-X ScanSAR data may be contaminated by postseismic deformation due to the fact that the post-seismic acquisition took place one month after the main shock, confirmed in part by a TerraSAR-X stripmap interferogram (processed with conventional InSAR) covering part of the area starting on 27 September 2013.

We have arranged the acquisition of a burst-synchronized stack of TerraSAR-X ScanSAR images over the affected area after the earthquake. It will be possible to apply interferometry to these data to measure the lower magnitude of the expected postseismic displacements. The processing of single interferograms will be discussed.

A quicklook of the wrapped differential TerraSAR-X ScanSAR co-seismic interferogram is provided in the attachment (range coverage is 100 km by using 4 subswaths). 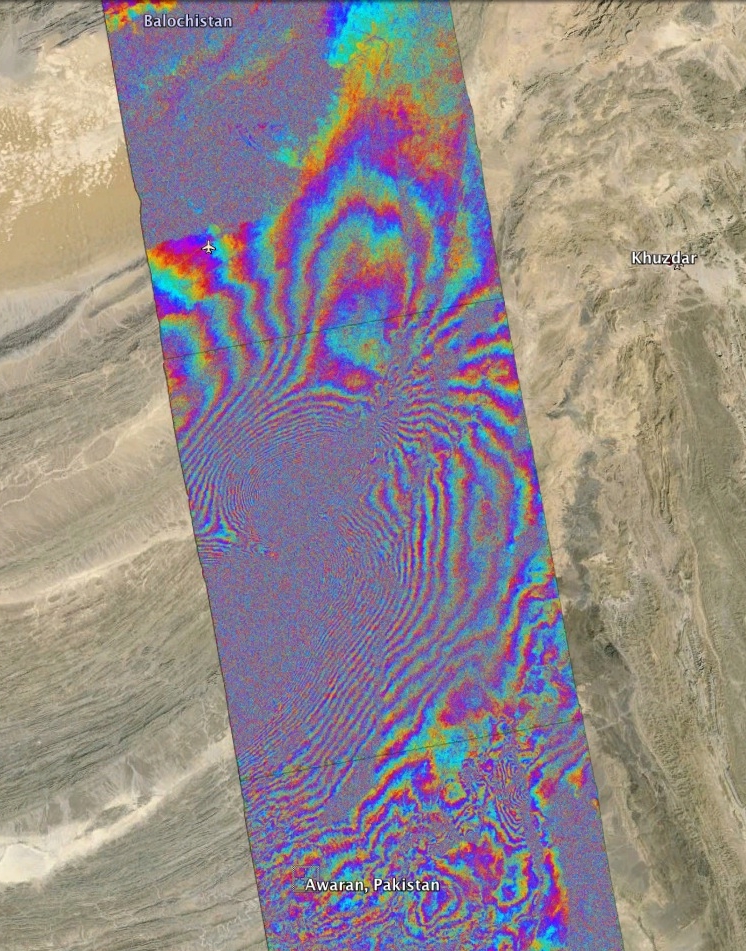