PP51F-08:
A Quarter Century Record of Stratospheric Sulfate Aerosol: implication for the past, present and future climates

Stratospheric sulfate aerosol (SSA) plays an important role in the earth climate system by reflecting solar radiation making it an attractive candidate in geoengineering to counter greenhouse warming. However, these planetary scales perturbations demand a priori understanding of SSA over a longer time period to resolve anthropogenic and natural perturbations to the delicate and thin layers- SSA and ozone layers. Here we present a quarter century high resolution seasonal record of SSA and its linkage to the ozone layer. Sulfate was extracted from a (1x1m) and 25m deep snow pit at the South Pole. The combination of cations, anions, O-triple isotopes and S-quadruple isotope measurements allowed us to deconvolve the oxidation history of SSA and tease out natural and anthropogenic components. The period (1980 to 2002) encompasses the largest volcanic eruptions of the century, El-Chichon, Pinatubo, Cerro Hudson and the three largest El-Nino Southern Oscillation events. The highest O-isotope anomaly (∆17O = 3.7‰) in SSA was observed during the super ENSO event (1997-98) and recorded changes in ozone levels of the upper troposphere-lower stratosphere (1). ENSO is another flavor of natural climate variability and is important as it links hydrosphere and the atmosphere in unique ways controlling rainfall and temperature.

The highest S-isotope anomaly was observed in 1998-99 and records changes in atmospheric dynamics and transport of sulfur compounds to the stratosphere following intense wild fires as a consequence of the Super ENSO event. The highest S-isotopic anomaly (∆33S = +2.26‰ and ∆36S= +0.51 ‰) is ~ 3 times higher compared to the Pinatubo signal, the largest volcanic eruption of the 20th century. The pattern of S-isotope anomalies in this period fits within the pre-Cambrian record of S-isotopes in three billion year old rock. The generation of such a large S-isotope anomaly in the present day oxygen rich atmosphere may have implications for the interpretation of Archean sulfate deposits(2). Our high resolution record of S-isotope anomaly in a volcanically quiescent and non ENSO time period (∆36S= −0.6 ± 0.2‰) indicates ~ 12 gigatonne transport of tropospheric S to the stratosphere and may have implications for understanding of global warming hiatus reported to be associated with the ENSO events (3). 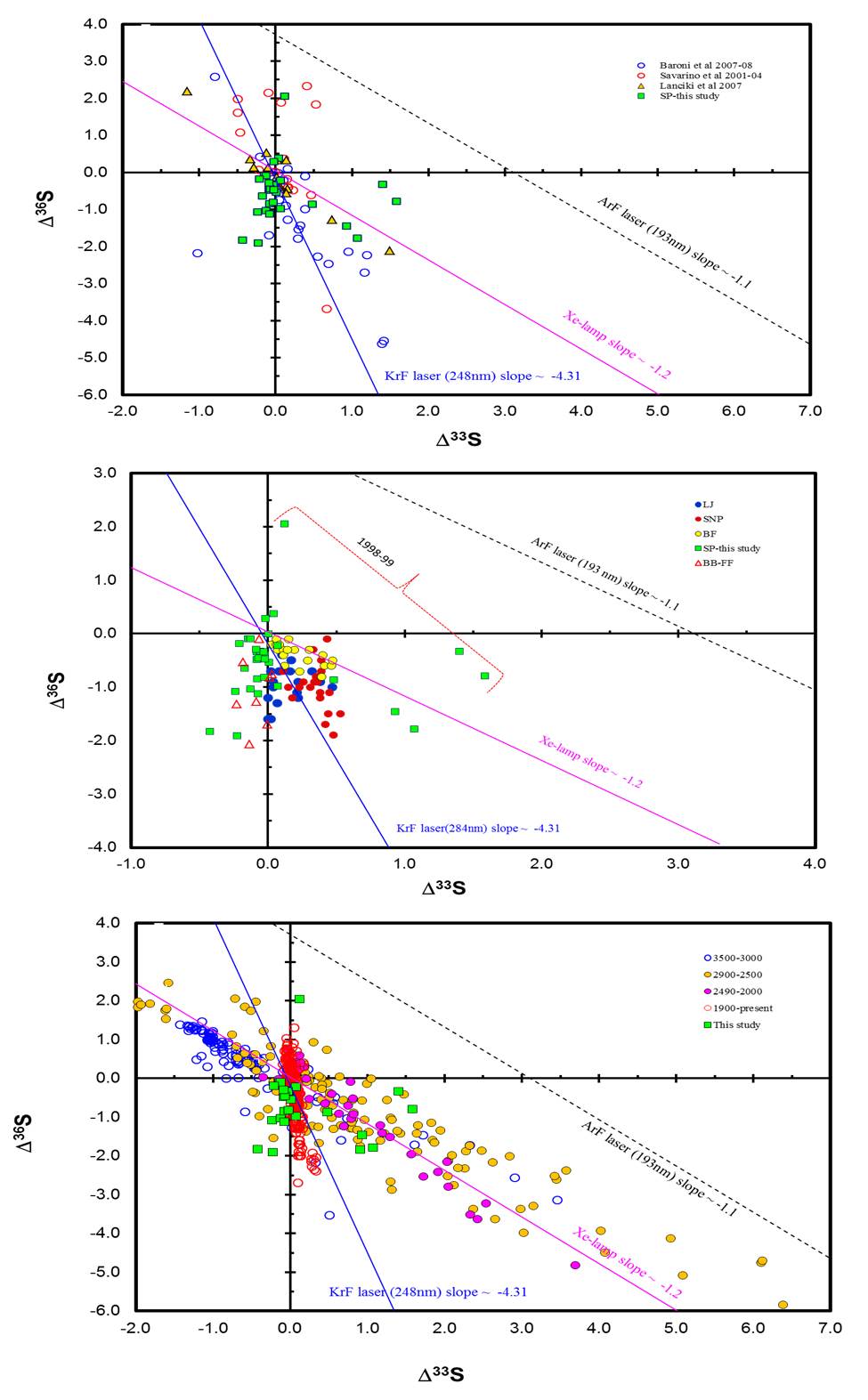