NH41A-3775:
Seeking a Credible Cause of the Recent Increase in Rock-avalanche Frequency in New Zealand's Southern Alps

An apparent increase in the occurrence rate of large, spontaneous rock avalanches in New Zealand’s Southern Alps has been suggested by Allen et al. 2011 and Allen and Huggel, 2013. They suggest a link to alpine permafrost decay due to anthropogenic global warming, similar to the increased occurrence rate in the European Alps which they attribute to this cause. The rock avalanche inventory is now more complete for the interval since 1976 because we have updated and added to the inventory. The threshold event volume of the inventory is ill-defined, but is probably of the order of 100,000 cubic metres; many events exceed 1,000,000 cubic metres. It is not credible that the earlier observers missed 75 % of the region's occurrences which would be needed if the true rate had been uniform over the last 50 years. The rate has been about 20 events per decade for the last 10 years, whereas for the period 1976-1999, it was 4 per decade.

Although the altitude range associated with most events is around the expected lower limit for present-day permafrost (Allen et al. 2011), it also is coincident with the altitudes of the region’s topographically protruding slopes which favour stress concentration and failure. In addition, the earliest documented spontaneous rock avalanche in the Southern Alps occurred in 1873 and fell from a similar altitude on the same face of the same mountain as the most recent event in 2014.

Cox et al. (In Press) shows that valley-bottom hot springs in the Southern Alps respond to distant strong earthquakes in a manner suggesting weak local ground deformation and increased bedrock permeability. Here we suggest that the surrounding slopes may respond to the same stimuli. As also observed elsewhere, the passage of seismic waves through a closely jointed rock mass under high static shear stress may lead to incremental permanent deformation and may accelerate stress corrosion. We suggest that the observed occurrence-rate increase may be associated with a seismic-moment-release increase in New Zealand, which is approximately coincident with a global increase in seismic moment release. It may also be associated with the accumulating slope deformations since about 1717 AD, when a great earthquake triggered much slope collapse in the region. 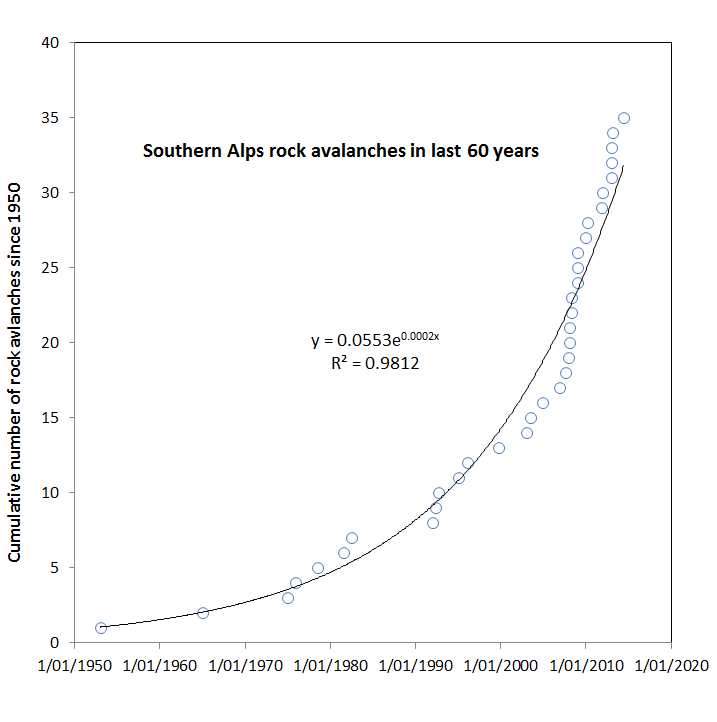