Observations of surface deformation are essential for understanding a wide range of geophysical problems, including earthquakes, volcanoes, landslides, and glaciers. Current geodetic technologies, such as GPS, InSAR, borehole and laser strainmeters, are costly and limited in their temporal or spatial resolution. Here we present a new type of strainmeter based on coaxial cable Bragg grating (CCBG) sensing technology that provides high-precision, distributed strain measurements at a moderate cost. The coaxial-cable-based strainmeter is designed to cover a long distance (~ km) under harsh environmental conditions such as extreme temperatures. To minimize the environmental noises, two CCBGs are introduced into the geodetic strainmeter: one is used to measure the strain applied on it, and the other acts as a reference only to detect the environmental noises. The environmental noises are removed using the inputs from the strained CCBG and the reference CCBG in a frequency mixer. The test results show that the geodetic strainmeter with dual CCBGs has micron-strain accuracy in the lab. 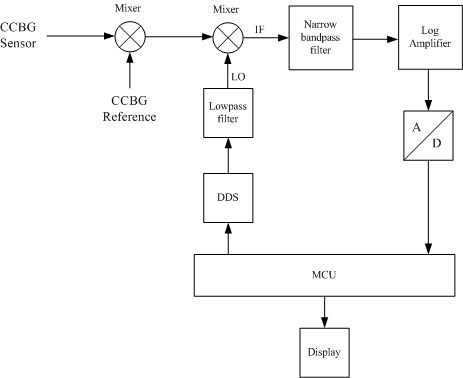