NH21C-05:
Monitoring of the stress state variations of the Southern California for the purpose of earthquake prediction

The three-dimensional geomechanical model of Southern California was developed, including a mountain relief, fault tectonics and characteristic internal features such as the roof of the consolidated crust and Moho surface. The initial stress state of the model is governed by the gravitational forces and horizontal tectonic motions estimated from GPS observations.

The analysis shows that the three-dimensional geomechanical models allows monitoring of the changes in the stress state during the seismic process in order to constrain the distribution of the future places with increasing seismic activity. This investigation demonstrates one of possible approach to monitor upcoming seismicity for the periods of days – weeks – months. Continuous analysis of the stress state was carried out during 2009-2014. Each new earthquake with М~1 and above from USGS catalog was considered as the new defect of the Earth crust which has some definite size and causes redistribution of the stress state. Overall calculation technique was based on the single function of the Earth crust damage, recalculated each half month. As a result each half month in the upper crust layers and partially in the middle layers we revealed locations of the maximal values of the stress state parameters: elastic energy density, shear stress, proximity of the earth crust layers to their strength limit.

All these parameters exhibit similar spatial and temporal distribution. How follows from observations all four strongest events with М ~ 5.5–7.2 occurred in South California during the analyzed period were prefaced by the parameters anomalies in peculiar advance time of weeks-months in the vicinity of 10-50 km from the upcoming earthquake. After the event the stress state source disappeared.

The figure shows migration of the maximums of the stress state variations gradients (parameter D) in the vicinity of the epicenter of the earthquake 04.04.2010 with М=7.2 in the period of 01.01.2010-01.05.2010. Grey lines show the major faults. In the table the values are sampled by 2 weeks, “-“ indicates time before the event, “+” indicates time after the event. 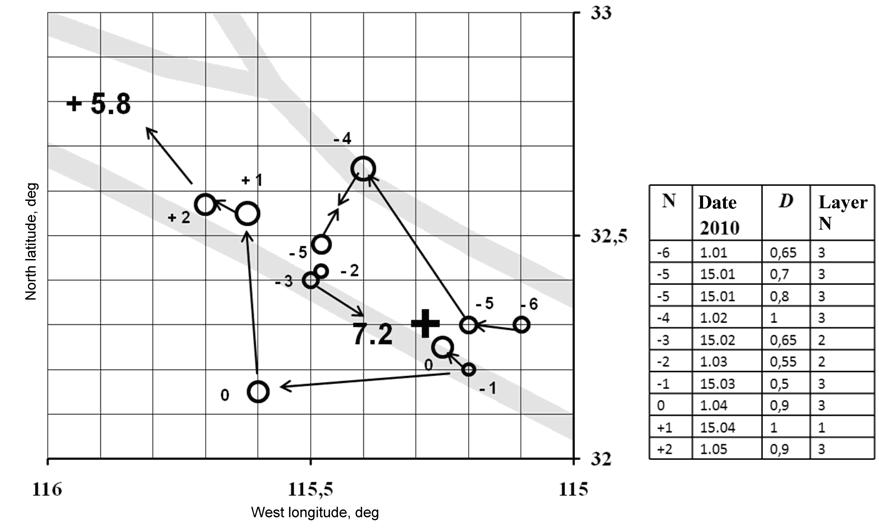