T43A-4704:
Force Required to Breakup a Continent: Implications on Rifting Localization and Migration

The maximum force from ridge push available is about 5 TN/m, lower than that required by 2D and 3D numerical experiments to rift the lithosphere in the absence of magmatic input. We carry out 2D numerical experiments without any magmatic input to study the extensional force necessary to start a rift basin and to breakup a continent. We assume a range of initial temperature structure, crust and mantle initial thicknesses and composition. In a first step, we use velocity boundary conditions (1cm/yr) and we monitor the force necessary to breakup the continent. Results can be classified in two groups according to the amount of force needed to rift through time: (1) The initial force builds up rapidly to 12-20 TN/m within 0.4-1.0 Myr. This is followed by an exponential decrease due to early strain localization and lithospheric weakening. The force is < 5TN/m after 4.4-7.0 Myr of extension. Continental breakup occurs approximately 10 Myr after the onset of extension forming narrow conjugate margins. This group encompasses experiments with initial Tmoho < 650oC and crustal thicknesses ≤ 35 km, where crust and mantle deformation are coupled from the early stages of rifting. (2) The initial build-up is more discrete, from < 3 TN/m to 4-6.5 TN/m in the first 0.1 Myr, followed by a decrease to a nearly constant value of 3-5 TN/m from 0.4 Myr to 10 Myr, when strain starts localizing. The constant force through time reflects lithosphere strengthening and migration of the deformation. This rift migration forms a wide basin (> 250 km wide) that may evolve to form very asymmetric conjugate margins. Breakup occurs 18 Myr after the onset of rifting or later. This second group corresponds to experiments with initial Tmoho > 650 km and crustal thicknesses ≥ 35 km. High bending stresses result in upper crust brittle failure and on enhancement of lower crust lateral flow. Interaction between ductile failure in the lower crust and brittle failure in the upper crust controls the migration of the deformation. In a second step, we repeat the same experiments applying a constant extensional force ≤ 5 TN/m to test whether and how the limited ridge push force naturally available can rift and breakup a continent. We then compare our results to the evolution of aborted rifts and to along strike variations in rifted magins such as the South Atlantic. 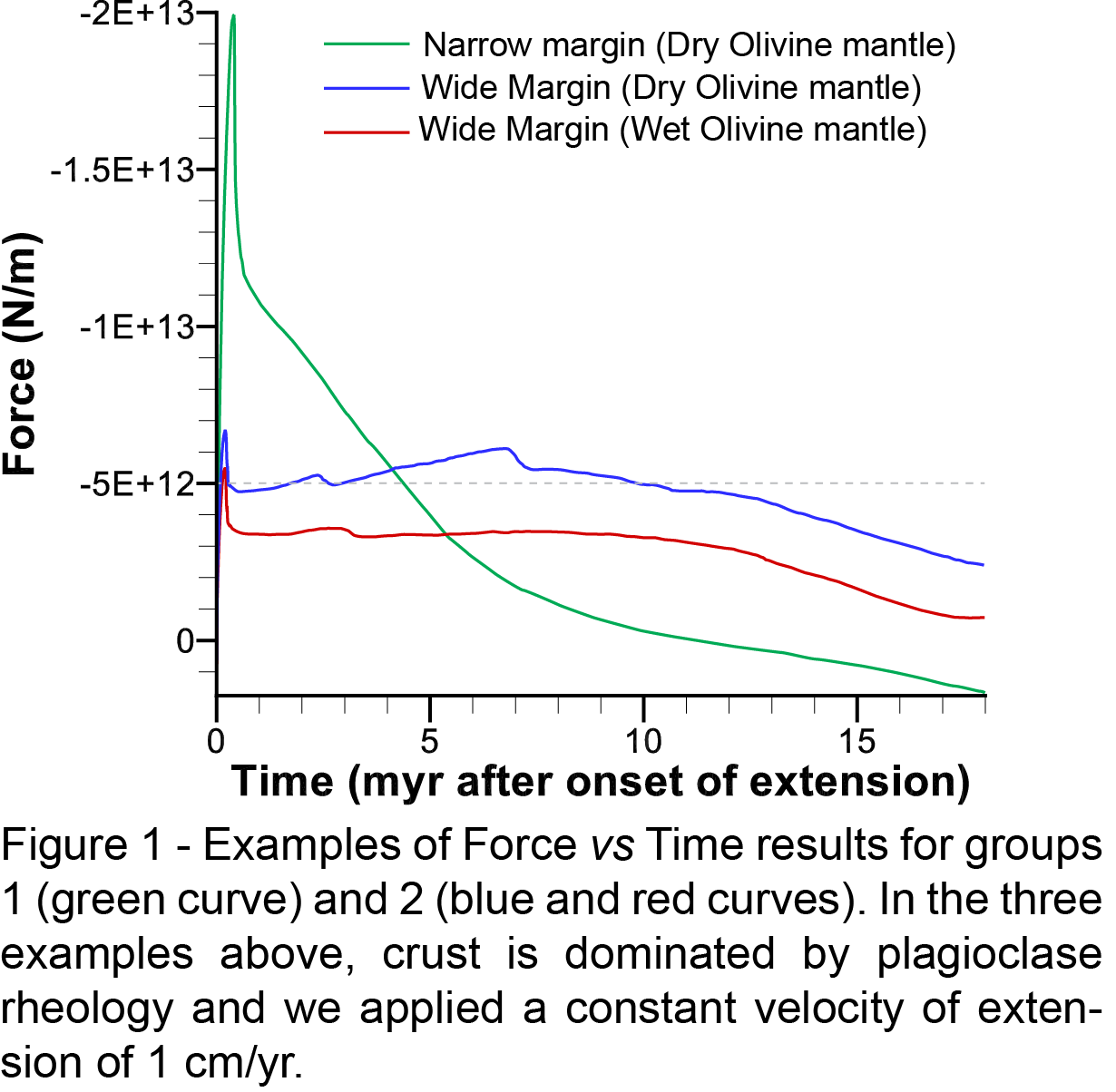