The concentration of bubbles, crystals or droplets into small volumes of magma is a key trigger for many interesting magmatic processes. For example, gas slugs driving Strombolian eruptions form from the coalesence of exsolved bubbles within a volcanic conduit, while Ni-Cu-PGE magmatic sulfide deposits require a concentration of dense sulfide droplets from a large volume of magma to form a massive ore body. However the physical mechanism for this clustering remains unresolved - especially since small particles in active magma flows are expected to mostly track flow streamlines rather than clustering.

We have uncovered a previously unreported clustering mechanism which is applicable to magmatic flows. This mechanism involves the interaction of particles with two kinds of chaotic flow structure: (a) high-strain regions within the well-mixed chaotic zones of the flow, and (b) unmixed islands of stability within the chaotic flow, known as Kolmogorov-Arnold-Moser (KAM) regions. The first figure shows the difference between chaotic and KAM regions in a chaotic laminar pipe flow.

Trapping occurs when particles are scattered from high-strain regions in the chaotic zones and become trapped in the KAM regions, leading to a rapid concentration of particles relative to their original distribution (shown in the second series of figures). Using a combination of these analogue experiments and theoretical analysis we outline the conditions under which this clustering process can occur. We examine the onset of secondary density-related instabilities and the effects of increased particle-particle interaction within the clustered particles, and highlight the impact of particle clustering on the dynamics of magma ascent and emplacement. 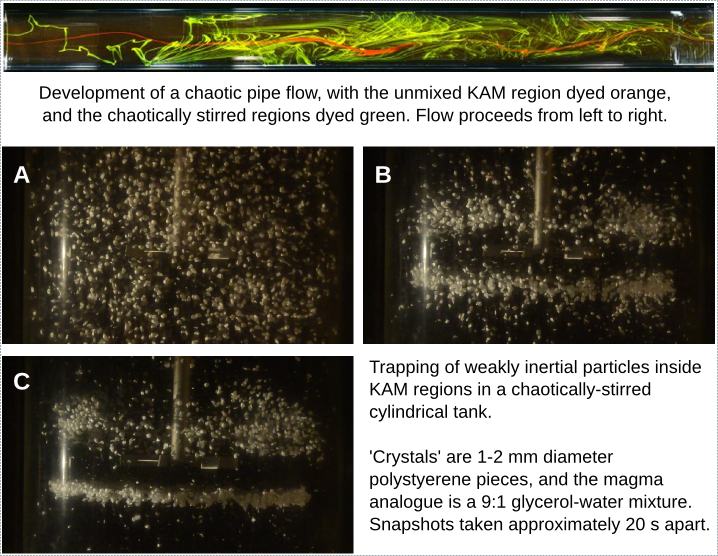