On April 1st, 2014 at 23:46:50 UTC, a powerful earthquake of magnitude Mw 8.1 occurred offshore the Northern Chile in the region of the North Chilean seismic gap. The epicenter of the earthquake was approximately 50 km offshore the Chilean coast, near the town of Pisagua. Two days after the main event a Mw 7.6 aftershock struck approximately the same area. In order to identify spatio-temporal changes of source parameters and stress before and after the mainshock, we analyzed in detail the local seismicity above magnitude Mw 3.0 within the time period 01/01/2013-30/04/2014 and estimated long term trends in b-values and earthquake productivity. We used data from the IPOC (Integrated Plate boundary Observatory Chile) regional seismic network, consisting of 20 “in land” broadband station deployed and managed by the GFZ-Potsdam. The recorded earthquake catalog shows an intense foreshock activity consisting of more than 1000 M3+ events in the source region. Full waveform techniques are used to derive both locations and focal mechanisms of about 435 seismic events. The location process has been performed by using a waveform stacking method (Grigoli et al 2013, 2014) with a layered velocity model based on CRUST 2.0 (see the attached figure for the location results of one of these events). Moment tensor inversion has been performed by using the KIWI tool software (Cesca et al. 2010), which is based on a two-step inversion approach. The first step consists in the inversion of the amplitude spectra to retrieve the best fitting focal planes, while the second inversion step is carried out in time domain to solve the focal mechanism polarity and to obtain the centroid location and time. Both location and moment tensor inversion resulted in agreement with the geodynamical settings of the region. Mapping the b-value reveals a spatiotemporal anomaly of low b-values characterizing the frequency-magnitude distribution of the foreshocks in the source area of the mainshock. Finally, clustering analysis of the retrieved focal mechanism and a stress tensor inversion has been performed in order to analyze the spatio-temporal evolution of the stress, before and after the mainshock. This work has been funded by the German BMBF “Geothecnologien” project MINE (BMBF03G0737A) and by Hazard and Risk Team (HART) and PBO-Chile of GFZ. 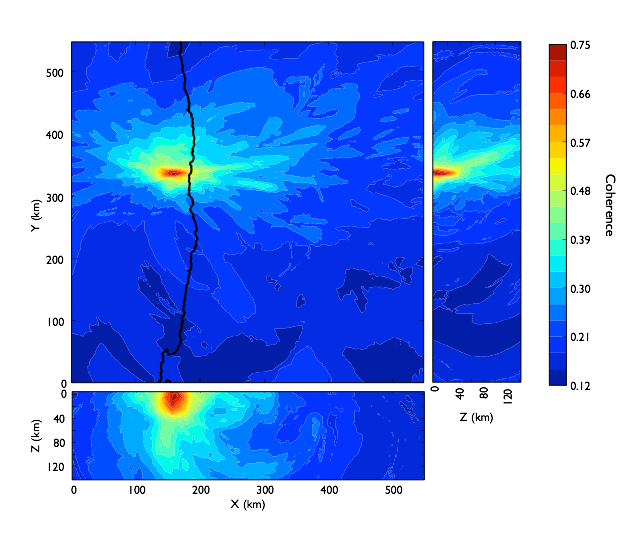